Maher Blasts America’s ‘Slob’ Culture: ‘When You Leave Your House, We Can See You!’ 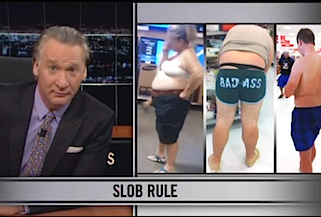 For his final “New Rule” of the night Friday, Bill Maher took a break from the gridlock of Washington to take a look at a larger problem facing the rest of America. “It’s one thing to be a country that doesn’t pay it’s bills,” Maher explained. “It’s another thing to dress like one.

Maher invoked New York City’s famous “broken windows theory,” which put an emphasis on fixing the little things to affect the bigger problems, to explain why Americans dressing a bit more professionally and appropriately could actually make us more successful and respected around the world. He said for Americans to regain some semblance of “pride and common purpose” they may have to “stop going to Target in pajama bottoms.”

“Maybe no one’s bothered to bring this to your attention, people of America, so let me say it plainly here and now,” he said. “When you leave your house, we can see you!” He rejected the idea that this problem “is about poverty not fashion,” by showing that you can get a pair of jeans on Walmart’s website for even less than you can buy “lounge wear” with the Duck Dynasty logo emblazoned all over them.

Comparing photos of Mad Men-era office life to the “People of Walmart,” Maher said, “We’ve gone from the shining city on the hill to the skid marks in aisle 3.”

Maher’s rant had echoes of controversial comments made by CNN’s Don Lemon this summer about the African-American community, who he said would earn more respect if they pull their pants up and dress less like “thugs.” But unlike Lemon’s commentary, Maher’s focus was placed squarely on white America.