Mancow To Huckabee: ‘What’s Happening In Egypt Could Happen In America’ 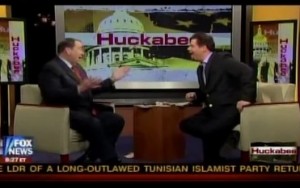 Before entering the world of politics, and later opinion television, Fox News weekend host Mike Huckabee served as Pastor at Baptist churches in his native Arkansas. As such, his rhetoric typically seems kinder and gentler towards his political foes than other right-of-center “conflictanators.” However, on his eponymous weekend show on Fox News, he found a perfect proxy to deliver anti-Obama vitriol, Chicago shock jock Mancow Muller.

The interview between show host and Muller exhibits a fairly sharp turn for the normally congenial Huckabee, who appeared to encourage some extremely pointed criticism from his guest, much of which didn’t seem to be entirely correct. Take for example that, according to the Chicago-based radio personality, the White House wants a “kill switch” for the Internet, to avoid what’s happening in Egypt from happening here in America:

They create the problems and we react to fear — the the four letter f-word that controls the masses and they offer the solution, “they” being the government. They fear the social services or these social networking, Twitter, Facebook, all of this stuff, but oh, no, we must have it in Egypt, but we don’t want to have it in America.

We had 70% of people didn’t want health care, we’re going to get it, no matter what we say we get it. We didn’t want more spending, looks like we are he’ going to get more and more spending. look at unemployment. I put it at 17%, I don’t know where you put it, but this is what they have in Egypt. If this keeps going like that, I want to make the point what happens in Egypt could happen in America if politicians, what we talked about last night. If the politicians don’t start listening.

There is a proposed bill put forth by Senator Joe Lieberman that would protect American Internet interests from cyber-terrorism and, in effect, give President Obama the ability to “turn off the Internet.” But the White House position on this is fairly nuanced, and its simply wrong to suggest that the current administration in any way fears social networking services like Twitter and Facebook when in fact the White House has embraced social media.

Perhaps the more interesting take from the following video is how Mike Huckabee, a legitimate GOP candidate for president in 2012, is using Mancow Muller as proxy to take uninformed shots at the White House.

Watch the segment courtesy of Fox News below: