Martin Bashir And NBC Terror Analyst: ‘Extremist American Thinking’ Not ‘Much Of A Jump’ From Norway Attacks 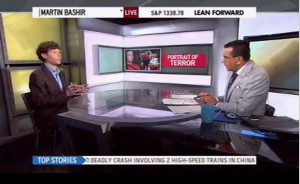 Norwegian shooter Anders Breivik and his alleged right-wing connections are predictably finding partisan commentators lining up with their appropriate teams. While some doubt the legitimacy of Breivik’s political leanings, others like MSNBC’s Martin Bashir just as ludicrously speculate here that it was “extremist American thinking” that inspired Breivik. Yes it’s cathartic (I guess?) to immediately find a group to hold responsible for the actions of individual terrorists, but until an investigation conclusively determines Breivik’s motive and allegiance, what good comes of anyone aimlessly pointing fingers of blame at their political opponents?

In the clip below, Bashir references Breivik’s 1500 page manifesto and how it quotes American bloggers and writers. Bashir then asks his viewers, “if a man in his thirties in a place like Oslo, Norway can be so easily influenced by extremist American thinking, then is it only a matter of time before we see similar violent acts here on American soil?” And in case Bashir’s subtle hints that right-wing conservatives and their emphasis on “anti-multiculturalism” was troubling, the on-screen graphic spelled it out more simply: “How Dangerous Are Radical Right Wing Bloggers In The U.S.?” Yet just when Bashir’s emphasis on the dangers of right-wing thought seemed like it would be the focus of this piece, Bashir’s guest upped the ante even further.

“Let’s turn back the clock to last summer and let’s remember the debate that’s been taking place since then. We’ve seen protests here in New York outside the Park 51 complex, saying that Islam is coming to take over America and that [the mosque] can’t be built . . . you had individuals showing up at political rallies in Arizona carrying assault rifles. Look, I mean, it’s not that much of a jump from that to this [bombing in Norway].”

Yes, that’s right, according to this expert on terrorism, attending protests and rallies is not “much of a jump” away from the unthinkable massacre caused by Breivik. Sometimes such lunacy isn’t worth highlighting and responding to, yet in this ping-pong match between Kohlmann and Bashir, it just keeps getting “better.” Kohlmann suggests in Republican presidential debates “Muslims are being treated like they’re some kind of evil virus” and Bashir concludes this incident in Norway reminds us that we “should be careful about what we say at political rallies.”

Worrying that we have intolerance in America towards people solely because of their religion is a normal and reasonable reaction to the Norway tragedy. Immediately jumping to the conclusion that right-wing rhetoric must be toned down and free speech in this country must be limited because of the actions of one psycho in a foreign land, now that’s truly crazy.