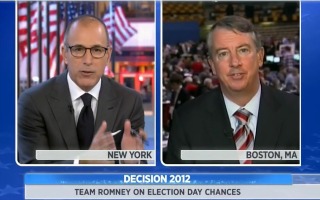 In a segment on NBC’s Today on Tuesday, Mitt Romney campaign advisor Ed Gillespie joined Matt Lauer where he was hammered with questions relating to the GOP nominee’s “Jeep ad.” Many members of the media and fact-checkers have said the ad is misleading. “The ad is accurate,” Gillespie insisted. “Sometimes the truth hurts a bit, but it’s the truth.”

Lauer asked Gillespie about an ad Romney’s campaign has been running in the Upper Midwest claiming that Chrysler is relocating Jeep manufacturing to China. Media outlets were nearly universally critical of the ad for misleading viewers into thinking Chrysler was downsizing rather than expanding.

“The reaction was swift and unanimous, Ed,” said Lauer as he read off a list of media criticisms of the ad. “How can this happen to a guy who is a son of a car maker and who is supposed to have the business résumé?”

“The ad is accurate,” Gillespie replied. “The head of Fiat came out and said they were going to open production in China for Jeep.”

“Right now, the Jeeps that are sold in China are made in the United States,’ Gillespie shot back. “This ad is accurate.”