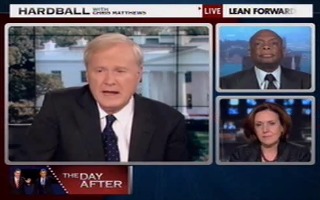 On Thursday’s Hardball, MSNBC host Chris Matthews and former San Francisco Mayor Willie Brown performed a postmortem on Wednesday night’s presidential debate which most political observers agreed President Barack Obama lost. Matthews was confused how, “objectively,” a man with such “scope,” “relevance,” and an “I.Q. in the hundred and whatever range” lost the debate. Brown said that he thought Obama was concerned that if he took on Mitt Romney, the public may have perceived him as “taking advantage of a lesser.”

Matthews asked Brown if there was hope for the president to not cede too much ground to Romney because, in his estimation, Obama had a stronger command of the facts even though he lost on style.

“It’s very, very difficult to get people in the world observing politicians ever come to the substance,” said Brown. “They always go for style. They are always influenced by performances. And I believe that Mr. Obama took a licking last night. The public knows that. And now to suggest that the facts support what his position was supposed to be, I don’t think carries.”

Matthews agreed and said, “objectively,” that President Obama should not have lost the debate because he has such a command of style as well as substance. Matthews also noted that Obama has an I.Q. “in in the hundred and whatever range.”

I do look up to him in so many ways. And when I’m with him, I do say to myself – and I do this really objectively, I think – I listen to him after he’s briefed on something and I think, ‘this guy ought to be president.’ He has the command of the issues. He has scope. He has relevance. He can talk to you as a regular person in common English, as well as the wonk talk. He’s got an I.Q. that must be in the hundred and whatever range – way up there. And yet last night he was tongue-tied. He let the other guy own the room.

“What do you think was on his mind,” Matthews asked Brown.

Brown said that Obama was too conscious of being perceived as “arrogant” and, if he had taken Romney to task, the president may have been “perceive as taking advantage of a lesser.”