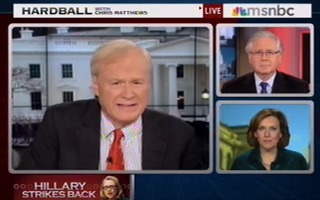 MSNBC host Chris Matthews had tough words for Sens. Ron Johnson (R-WI) and Rand Paul (R-KY) who pointedly questioned Sec. Hillary Clinton today regarding her role in the September 11, 2012, attack on an American consulate in Benghazi, Libya. Matthews called Johnson a “pissant” due to his harsh line of questioning and said that Johnson is only in the Senate due to a low turnout election in 2010. “He doesn’t represent anybody,” Matthews scoffed. He suggested that he thinks off-year and midterm elections should be abolished, forcing all lawmakers to run on a national ticket.

During today’s Senate hearings, Johnson prodded Clinton about the Obama administration’s early insistence that the attack in Benghazi erupted spontaneously from a protest over a YouTube video. He insisted that Americans were to repeatedly by the administration.

Clinton replied that the verdict as to what caused that attack was still out. “What difference, at this point, does it make?” Clinton said to him with audible exasperation.

“That was kind of a pissant performance by this guy from Wisconsin,” Matthews opined after playing the clip of their exchange. “I don’t know how these guys get over the wall into American politics.”

“I think they won in a very low turnout election in Wisconsin,” Matthews added. He said he believes that all elections should be national elections to ensure that senators like Ron Johnson face an electorate that is not “weird” and “warped.”

“No, he doesn’t,” Salon.com editor Joan Walsh agreed. “He was so overmatched, Ron Johnson.”