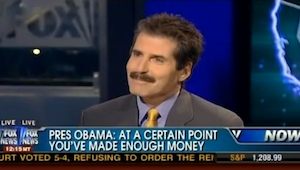 President Obama sure stepped in it with his quote at a midwest rally where he said “at a certain point you’ve made enough money.” When you’re trying to defend yourself against claims that you have socialist leanings, saying something like that is about as ill-advised as Jeffrey Dahmer telling a parole board member they look “good enough to eat”. Sure enough, the media has been talking about it all day, and on Fox News, Megyn Kelly brought John Stossel over to dissect it. Stossel was there to defend Wall Street while Kelly did a good job of playing devil’s advocate in what ended up being an interesting conversation.

First up, the two discussed why Obama would have said it and what the public response would be, with Kelly calling it a “populist message”. The irony of anyone on Fox News accusing someone of trying to be populist aside, she makes a good point. The remark was off the cuff and Obama was probably trying to meet the anti-Wall Street sentiment that was floating around last week and went too far. When Kelly asks Stossel if he thinks the American people will respond to the comment, this is what he says.

“Sadly, I think people envy the people that are making money and think that it’s a zero-sum game. As Gordon Gekko said in that movie, ‘Some win, some lose’ and I get why you lawyers and politicians might feel that way because, in your worlds, it is. One person wins, somebody else loses. But business, because it’s voluntary, makes us all richer. And so we shouldn’t think that way.”

Later, when Kelly brings up the recent Goldman Sachs scandals, Stossel stepped in to defend the country.

“I don’t know if these people really were cheating but Goldman Sachs didn’t cause the bubble to pop. If someone’s to blame, it’s Fannie and Freddie and all the policies that encouraged reckless spending. And that’s government.”

It’s interesting to hear someone sticking up for the company after two weeks of them being a pariah in every news outlet around. If this is at all indicative of how the media (or the conservative media) begins to turn during the debate over financial reform, it’ll definitely seem like Obama’s comments merely helped the people he was trying to hurt while hurting himself in the process.