Megyn Kelly Destroys Erickson And Dobbs: ‘Who Died And Made You Scientist-In-Chief?!’
video

Megyn Kelly Destroys Erickson And Dobbs: ‘Who Died And Made You Scientist-In-Chief?!’ 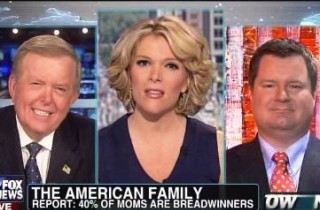 Megyn Kelly took two of her Fox colleagues to the woodshed this afternoon.

In response to Erick Erickson and Lou Dobbs making controversial comments this week about a Pew study finding that 40% of American households have a mother as breadwinner, Kelly brought the two of them onto her show and proceeded to tear into them.

To recap: during a Wednesday evening segment of FBN’s Lou Dobbs Tonight, Erickson, Dobbs, and other Fox male contributors lamented the Pew study’s “troubling” findings, claiming it signaled a disintegration of the American family. Erickson went the farthest with his analysis, claiming it is “anti-science” to not believe that men are supposed to play the dominant role in the household. The group collectively bemoaned the increase of female breadwinners.

In response, this afternoon, Kelly asked: “What makes you dominant and me submissive and who died and made you scientist-in-chief?”

“It doesn’t have anything to do with submissive, per se, and it was poorly constructed how I said it,” Erickson responded before reiterating his point that, in nature, male animals “tend” to be the “dominant one” and that “feminists” have taken society to the point where “male and female roles are completely interchangeable.” He then claimed: “No one is saying women can’t be a breadwinner or even the primary breadwinner.”

Kelly was not convinced, calling Erickson out for his backpedaling: “That is not what you you have been saying for the last couple of days.” After reading aloud from Erickson’s blog post responding to the controversy, in which he railed against homosexual parents and mothers in a dominant breadwinner position, Kelly presented him with the counterfactual:

Erickson waved away those findings as “self-selective” and then hedged his comments as simply suggesting women cannot “have it all” and are “making compromises” by trying to be a mother working 12 hours per day and attempting to balance that with being a good parent. “I’m not judging them; and no one should. It is just the reality,” he said.

“You are judging them,” Kelly shot back. “You come out clearly and say women who choose to work instead of staying at home to nurture the children, are imposing a worse future on their children.”

“I view it as a statement of fact when you have a mom working full-time and coming home to be a full-time mom as well, it is very difficult and three quarters of the public agree,” Erickson responded.

“Just because you have people that agree with you doesn’t mean that it is not offensive,” Kelly replied. She then pointed again to Erickson’s blog, calling him out for laughing off his critics — including herself — by labeling them “feminists” and “emo liberals.”

She then tore into him once more:

“I was offended by the piece nonetheless. I don’t like what you wrote one bit. I think you are judging people. You sound like somebody who is judging but wants to come out and said ‘I’m not, I’m not, I’m not but let me judge, judge, judge. And by the way, it’s science and facts, facts, facts.’ But this is a list of studies saying your science is wrong and your facts are wrong.”

She later pointed to “69 studies over 59 years of research” to dispel Erickson’s “science,” asking him: “Why are we supposed to take your word for it, Eric Erickson’s science instead of all of the experts?”

His dismissive response: “I think the experts can be as politically motivated as any one else.”

The rest of the conversation was equally tense, with lots of dismissive chuckling coming from Erickson’s corner and, at one point, Dobbs calling Kelly “Oh Dominant One” in a jokey manner. Watch the full segment below, via Fox: