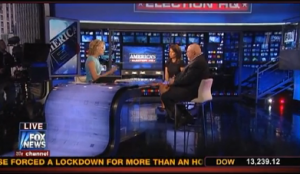 America Live‘s Megyn Kelly brought on a panel Tuesday to discuss the mounting pressure from the GOP urging Senatorial candidate Todd Akin to step down.

Ed Rollins felt that there is no possible way Akin can win this race as money and support dwindle in the wake of his comments, and also runs the risk of damaging Mitt Romney‘s chances of winning Missouri.

Julie Roginsky said it was fair to tie Akin’s comments to the Romney/Ryan ticket because Paul Ryan had co-sponsored legislation along with Akin that sought to create and differentiate between different “types” of rape through the use the phrase “forcible rape.”

There was some discussion as to whether the Republican party’s official platform offered an exception on its abortion stance when it came to instances of rape, incest, or pregnancies wherein the mother’s life was placed at risk. “At the end of the day,” said Rollins, “our party has always had exception for rape, incest and life of the mother. And I, for one, am appalled that they’re trying to change that at this point in time.”

“Let me just jump in on that,” Kelly interjected, “because I want to clarify. So, you’re right, it hasn’t been the official platform of the Republican party; it’s been suggested by a committee and then has to be approved. Same thing with gay marriage on the Democratic side.”

“But, what I was told,” she continued, “was that this has been part of the Republican platform for like twenty years. That they are against abortion, and that John McCain, last time around, wanted to be more clear about the fact that the platform said ‘except in cases of rape or incest.'”

“It started with Reagan,” Rollins explained, who upheld these exceptions and did not differentiate between different “sorts” of rape.

Later, Kelly pointed out to Roginsky that, where Democrats are concerned, Obama supports same-sex marriage personally but not officially, drawing a parallel to Romney’s personal versus official stance on abortion. Roginsky felt that Obama wouldn’t throw his party “under the bus” when it came to legislation on the issue.