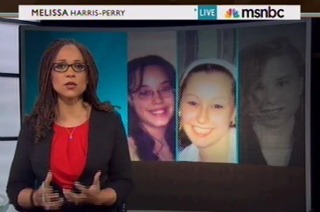 Remember folks, it’s conservatives who are obsessed with female and teenage sexuality. Continue to remind yourself of this immutable law of nature as you watch Melissa Harris-Perry and her panel guests effortlessly turn the decade-long torture faced by Amanda Berry, Gina DeJesus, and Michelle Knight at the hands of Ariel Castro into a cause that fits the political desire to expand access to contraceptive drugs. Personally, I am not strictly pro-life in that I have few concerns with allowing young girls to access contraception drugs, sometimes without parental consent, for many of the reasons stated in this segment. Family planning is one of the best ways to ensure stable and loving families persist and that society is not overburdened with the need to provide for the children of young, unwed mothers. But if a conservative were to hijack an episode of gross criminality like this to advance their particular prescription for a perceived societal ill – particularly on the issue of sexuality and abortion rights – their liberal opponents would be rending garments over the shamelessness of that politicization. Evidently, no such self-awareness exists on the set of Melissa Harris-Perry.

“The survival story of these women after enduring abduction, enslavement, and torture is a chilling echo of others like Jaycee Dugard and Elizabeth Smart that have also captured national attention,” Harris-Perry began.

She said that these stories and others like them ignite Americans’ “SVU-fueled” nightmares about the sexual vulnerability of teen girls. “But, far more common when it comes to young women and sexual exploitation are the stories we forget or overlook altogether,” she said.

Harris-Perry lamented that teen girls are not allowed to enter sexual maturity in a safe environment. “Instead, America’s young women are shamed, silenced, mis-educated, exploited, and sometimes even denied health care.”

And speaking of exploitation, enter the GOP.

Harris-Perry went after North Carolina’s Republican legislature for advancing a bill that would require parental consent to treat children for sexually transmitted disease or to receive an abortion.

Again, Harris-Perry raises good points. It is not always the result of parental negligence that these young girls are sexually abused. Sadly, sometimes it is the parents or guardians are the abusers. But she overlooks the culture, which any social welfare worker will lamentably relate, of a cyclical neglectful parenting resulting in teenage pregnancy. For some reason, liberals tend to dismiss the latter while conservatives underestimate the prevalence of the former. Both are real. Both are problems.

Harris-Perry’s guests proceed to go on a predictable sermon advocating for teenagers to have unfettered access to Plan B. But for this group, who undoubtedly perceive themselves to be steeped in nuance, their crusade is black and white, right and wrong.

All the while, MHP’s guests never once appear to consider the fact that that they are engaging in the politicization of a crime. If this were a conservative group doing the same thing, they would surely be as revulsed as I was.