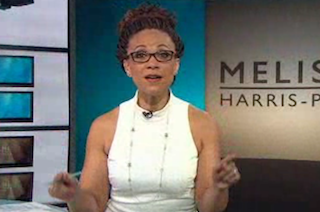 While much of the media focused on President Obama’s recently-revealed surveillance policies, Melissa Harris-Perry saw the upside of the president’s week, noting his feisty judicial nominations and vigorous campaigning for the Affordable Care Act as sign of Obama’s “swagger.”

“This week, [Obama] made it clear,” Harris-Perry said. “Game on. Republicans want to block judicial nominations? Here’s three for ya, all at once, for the second most powerful court in the country. That was Tuesday. Box me in on my choice for Secretary of State? How about some in your face choices for National Security Advisor and UN Ambassador in the form of Susan Rice and Samantha Power? That was Wednesday. Vote to repeal my signature piece of legislation thirty-seven times? Well, on Friday President Obama went to California to tell everyone that his law is already working and Republicans just have to deal.”

Harris-Perry made the case that Obama is set to win seats in the House in 2014, despite the political rule of thumb that the ruling party bleeds seats in second term midterms, by connecting the GOP’s current scandal-lust to their late-90s impeachment of Bill Clinton, which led to the Democrats gaining seats in the House. She argued Obama is daring the current GOP by doubling down on his policies, popular or not.

“Make no mistake about what happened this week,” Harris-Perry said. “The president threw down the strategic gauntlet. To Republicans and Democrats alike, he essentially said: my name may not be on the ballot, but my policies will be.”

This is despite the unpopularity of Obamacare, which reached a record high this week. “What if it turns out that President Obama knows something a lot of Americans don’t?” Harris-Perry asked. “Here he is, President Obama betting everything that it will work, and that he can convince Americans to make the same bet. There is one word for that kind of audacious: swagger.”

Watch the clip here, via MSBNC: