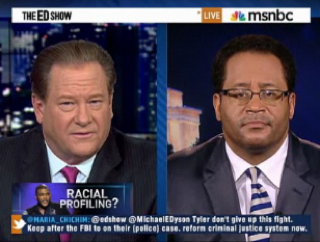 With the Trayvon Martin case still at the forefront of much of the news, racial profiling in general has become a frequent topic of conversation, and many have shared the frightful experiences that have come out of profiling situations. One such person in the spotlight this week is Tyler Perry, who wrote a long Facebook post about a traffic stop that could have gotten ugly had a black police officer not intervened. Ed Schultz used the Perry example to illustrate the dangers of profiling with guest Michael Eric Dyson on his program yesterday, and Dyson offered some solutions. Strangely among them, he cited community policing. Isn’t community policing what brought racial profiling into the news cycle to begin with?

Perry wrote a post last Sunday on Facebook about an experience in which a police officer stopped him for an illegal turn, and he and his white partner became extreme hostile towards him until he began to behave the way his mother had taught him to in the presence of officers:

I finally realized that he thought that switch was the key, so I told him that it wasn’t the key he was grabbing. I reached down into the cup holder to get the key, not realizing that the key had a black leather strap on it. As I grabbed it they both tensed up and I dropped it as I heard my mother’s voice from when I was a little boy.

My mother would always say to me, “if you get stopped by the police, especially if they are white policemen, you say ‘yes sir’ and ‘no sir’, and if they want to take you in, you go with them. Don’t resist, you hear me? Don’t make any quick moves, don’t run, you just go.” My mother was born in 1945 into a segregated hotbed town in rural Louisiana. She had known of many colored men at the time who were lynched and never heard from again. Since I was her only son for ten years, growing up she was so worried about me. It wasn’t until after I heard her voice that I realized that both of these officers were white.

Perry escaped the situation when a black police officer drove by and saw him, gave him what Perry describes as an “oh no” face, and spoke privately to the officers, one can imagine explaining to them who Perry was and to not overdo it.

Schultz and Dyson discussed the situation on the program on Friday, with Dyson noting that he was familiar with the “fear, the anger, the hostility, the intimidation” that comes with that sort of stop. “I’ve had this happen to me at 3 o’clock in the morning on the highways of New Jersey, on the streets of Detroit,” he says, and no matter who you are, “whatever stature you have, whatever education you have, whatever achievements you have go out the window” before a hostile police officer.

Dyson proposed some solutions– for one, police should “treat everybody like you treat Tyler Perry after you find out he is Tyler Perry.” He also proposes a review board within the police department to hold officers guilty of racial profiling accountable. Somewhat baffling in the context of the racial profiling case at the forefront of the news today, though– the killing of Trayvon Martin— was his call for more “community policing.” “How about people in communities policing those communities?” he offered, adding that he thought the President weighing in on profiling in a tactful manner, as in the Martin Case, could do a lot of good.

Dyson’s general instinct that the problem with racial profiling is a lack of accountability for police officers who engage in it is spot-on, but who does the policing is key. Yes, most people who work in community policing and neighborhood watch groups do so because they care about their neighbors and they want people to feel safe. Then there are the George Zimmermans of the world, who seemed to have always wanted to be policemen and found a way to get around the strict requirements of training and graduation from police academy. Not being a uniformed officer is absolutely no guarantee of being unable to discriminate racially, and unfortunately in this context, the glaring question of who watches over the community watch shines brighter than the answers to some others.