Michael Moore To Wall Street: ‘People Are Going To Demand That Your Ass Is In Jail’ 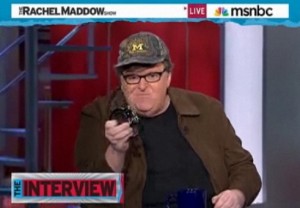 Filmmaker Michael Moore is angry, very angry. Appearing last night on The Rachel Maddow Show, Moore spoke passionately about the current financial strain that state and federal governments are feeling and pointed the finger at corporate fat cats and “anybody who works on Wall Street.” If this sounds like a polemical version “second verse, same as the first,” don’t be fooled. This version of Moore’s enmity to America’s wealthy came complete with hand cuffs and a demand for justice.

Moore lauded the coverage and information provided by host Rachel Maddow (and oddly confirmed by Fox News’ Shep Smith) and reasserted his claim that “we are not broke…Wisconsin isn’t broke… America isn’t broke,” adding “the money is just not in the people’s hands, it is in the hands of the rich, the rich who committed these crimes back on wall street and got away with it.” Moore then pulled out hand cuffs and, speaking to camera, issued a warning to “anybody who works on Wall Street.”

Watch the clip embedded below, courtesy of MSNBC (a rough transcript from MSNBC follows the video):

Anybody that works on Wall Street, anybody that works for one of the banks, take a look at this, okay? Because this is what’s coming. This is what’s coming for you, because the people aren’t going to take it any more. The people are going to demand justice. They are going to demand that your ass is in jail. You have taken the money, we want the money back. You have taken our jobs overseas, we want those jobs back. Those are a national resource. Those are not yours to do with as you please. They affect all of us as society. We have a right to those jobs, we have a right to that money that used to belong to the people of this country. A million people evicted from homes, foreclosed this year. Another million expected this year. I just wonder again, if I can, address the Wall Streeters and bank. How long is this going to go on?