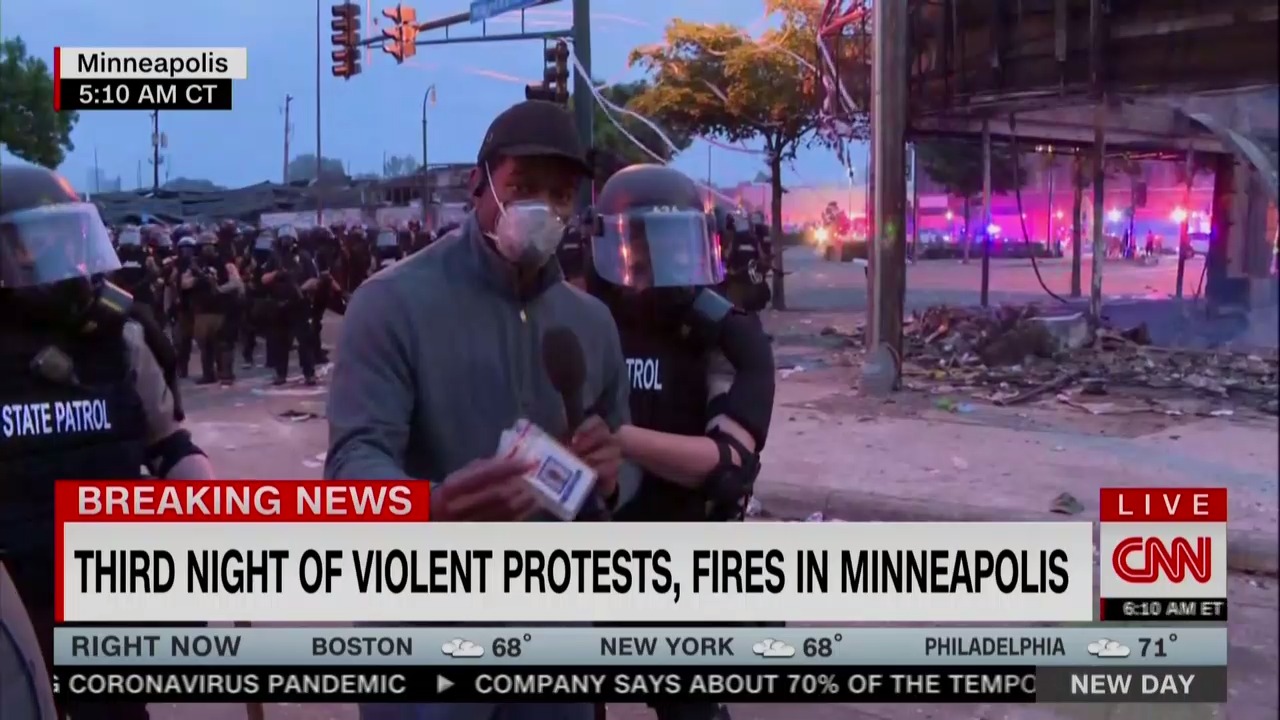 In a comment posted to Twitter, the Minnesota State Patrol said, “In the course of clearing the streets and restoring order at Lake Street and Snelling Avenue, four people were arrested by State Patrol troopers, including three members of a CNN crew. The three were released once they were confirmed to be members of the media.”

In the course of clearing the streets and restoring order at Lake Street and Snelling Avenue, four people were arrested by State Patrol troopers, including three members of a CNN crew. The three were released once they were confirmed to be members of the media.

Jimenez repeatedly identified himself as a member of the media prior to the arrest, and displayed his press badge from CNN as confirmation. This was in addition to the fact that the exchange took place live on air.

The explanation was swiftly panned by a host of prominent observers.

If this is the statement when everyone can see the truth live on CNN for themselves, what happens when the camera is off? https://t.co/MyWtL8rhT4

This statement makes no sense. They identified themselves on live television as members of the media before the arrest. We need a better explanation than this. https://t.co/ttmsMPj3fE

We watched the arrest live. It was clear they were journalists. https://t.co/aNrMy4nWCB

Because the big ol’ camera (rolling live on air all over the world) didn’t give that away… https://t.co/NvJApX4e7W

They didn’t just (repeatedly) identify themselves, the reporter was holding a mic and talking into a camera, along with two crew members…

There shouldn’t have been any confusion.

Perhaps a review of their radio transmissions will clarify who issued the order to arrest. https://t.co/TwjCs7tFzt

We have some follow-up questions. https://t.co/2UevztMn3C

Total BS. What did they think they TV cameras and microphones were for? According to @OmarJimenez, the arresting officer told him: "I'm just following orders." https://t.co/ale9pdgh2P

Omar was holding up his press credential on live TV. https://t.co/lTRXttUppD

We watched it LIVE. This is not what happened. https://t.co/gjto23GCLN

Omar Jimenez and crew were heard saying they were journalists and were seen showing credentials on on-air prior to being arrested. https://t.co/CAE9CWviQA

More nonsense. Crew identified themselves immediately at the scene, both verbally and with credentials. And of course, there was a whole set of equipment such as camera, lights, cabling, microphones, etc., that should have also served as a clear identifier. https://t.co/9audAfe8Om

His press pass was clearly visible

They were carrying cameras and had IDs. Couldn’t have been that hard to crack the code. https://t.co/A6bycAu0ko