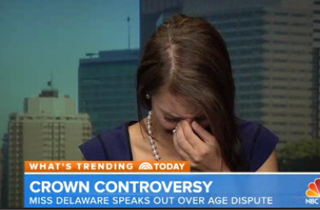 Two weeks after she won the title of Miss Delaware, Amanda Longacre was told that she couldn’t even be Miss Delaware — because, at the tender age of 24, she is way too old.

According to USA Today, the rules of the pageant state that contestants must be between the ages of 17 and 24. While Longacre is currently 24, she’s turning 25 in October, and at the stroke of midnight, her blossoming youth will suddenly shrivel into a decaying husk, therefore making her ineligible for Miss America. (This, even though she would still be 24 during the Miss America pageant itself.) To rub salt in the wound, Longacre learned of her disqualification on Tuesday when the Miss America Organization announced it in the middle of crowning the runner-up, Brittany Lewis.

In an interview with The TODAY Show — during which she repeatedly broke down in tears — the distraught Longacre says that she’s exploring legal options, since she’d never misled Miss America once during the competition. “I provided my birth certificate, my driver’s license, you have to provide your Social Security card… my birthday was even written on the contract that the bord signed off on and approved.

In addition to losing her title, Longacre also loses scholarships and a year’s contract to perform her Miss Delaware duties. “It’s like they’re trying to erase me in a way, like it never happened,” she added.