Missouri State Senator to MSNBC: ‘This Is Our Race War’
Video

Missouri State Senator to MSNBC: ‘This Is Our Race War’ 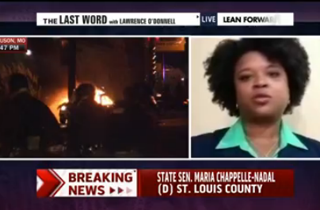 Missouri State Sen.Maria Chappelle-Nadal (D) was one of the first politicians in the media in the aftermath of Michael Brown‘s death, and, as the woman representing Ferguson in the state legislature, conveyed the fury of her constituents to MSNBC’s Lawrence O’Donnell when Officer Darren Wilson was not charged for Brown’s death.

“Not only has this Mike Brown movement revealed the true intentions of people in police departments across the state, but I have to tell you that there has been systematic racism, institutionally in state government for decades, including my own state party,” she said. “People are angry, and they are hurt, and they’re trying to figure out: how are they going to receive justice?”

While she acknowledged her own role as a legislator, and promised to change several statutes in the “excessive force” laws of Missouri, she refused to brush her community’s long-simmering anger under the rug:

But right now my community is hurting. They are in pain. They have been in pain before Michael Brown. Having to look at Michael Brown’s body for four and a half hours, injured them more. I have constituents who have PTSD. I have constituents who have no hope. And tonight, when you listen to what [St. Louis County Prosecuting Attorney] Bob McCulloch said — in fact, I’ve been getting text messages non-stop as i’ve been listening to your reporting — and people are angered, because they feel as though his words are empty, as it was said earlier today, and because of the systematic racism that we have in our state government, and our state party, and if we do not bring the truth to bear, then we will not recover from what we are going on, what we are experiencing right now.

“And I have to tell you, this is St. Louis’s race war,” she continued calmly, holding back tears. “We didn’t have a race war like other cities throughout the country. This is our race war. And people have to be open, and they have to be honest. And they have to earnest. And they have not been earnest for decades. I know people in my own party, in my own government structure who disregard things that we say, and how we feel. And we are not going to allow it anymore.”