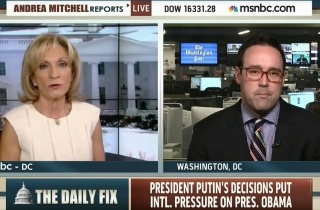 On Tuesday, MSNBC host and NBC News Chief Foreign Affairs Correspondent Andrea Mitchell discussed how Americans are view the developments in Ukraine following Russia’s invasion and annexation of the Crimean peninsula. She asked her guests whether Americans are “paying attention” to this event, or if they merely view it as a “distraction” for President Barack Obama from domestic affairs.

“Are people at home paying attention to Obama vs. Putin, or is this just a distraction from domestic policies that he needs to be focusing on?” Mitchell asked The Washington Post reporter Chris Cillizza.

“This is definitely a backburner issue still, I think, at the moment,” Cillizza observed.

RELATED: Romney’s Not Wrong on Obama’s Mishandling of Foreign Affairs, But He’s Not Right Either

Mitchell asked The Washington Post reporter Anne Gearan if Republicans’ criticisms of Obama’s handling of the crisis in Europe have any merit. Gearan replied that Obama has few tools at his disposal save a “military option,” which she noted Americans and Europeans have “absolutely no appetite for.”

“Let me just say in defense of the president, let me say forsake of argument here, he was elected to end two wars,” Mitchell continued. “That’s his argument.”

Cillizza agreed and noted that Americans are now skeptical if the Iraq and Afghanistan wars were worth the cost. He added that a “majority of the country” do not believe that America should not engage itself in disputes abroad.