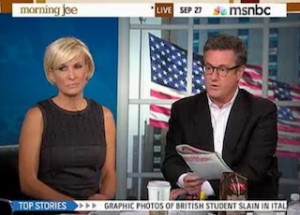 Newsweek/Daily Beast Editor-in-Chief Tina Brown appeared on MSNBC’s Morning Joe, as she does every week, to discuss some of the most notable features in the weekly edition of her magazine. The topic of conversation today centered on the Howard Kurtz article about Fox News chair Roger Ailes, specifically how the dominant cable news channel has allegedly “corrected course” in their coverage, ostensibly going from a predictably hard-charging conservative point of view, to a more moderate one.

At this point, it no longer matters if it’s true (or not) that Fox News has “course corrected”; yes, Glenn Beck‘s dire predictions are no longer included, and as we have consistently pointed out, Bill O’Reilly often stands out with his non-doctrinaire approach to real issues. But long time viewers of Fox News (and there are literally millions and millions of them) would be hard pressed to point to any significant difference in the editorial and news offerings at FNC.

So the genius of Mr. Ailes’ media operation again seems to be in evidence, as Ailes, in Tom Sawyer-esque fashion, gets MSNBC to paint his fence. Here we have a moderate and well respected conservative thinker in Joe Scarborough openly praising the brilliance of Roger Ailes and Fox News to viewers of MSNBC. By comparison, it’s impossible to imagine Fox and Friends anchors speaking with such candid admiration for MSNBC’s Phil Griffin, though that speaks as much to the qualitative differences between the two competing morning shows — one is meant to be an open dialog among disparate points of view, and the other a more traditional entertainment program.

Yes, Scarborough gets some slight jabs in on Ailes, saying that the Fox News chief’s “course correction” assertion basically validates a thesis put forth earlier in the year by New York magazine’s Gabe Sherman, that Ailes “admits that he took the Republican party too far over the cliff.”

But I’m not sure that that is the case, on a number of levels. Sherman’s essay essentially stated that Fox News was an enormous hit from a business perspective, but that politically speaking, it would not be able to produce a viable presidential candidate. It was far too early to make that statement in the Spring of 2011, and it’s still too early to believe that now. Further, there is a reason that we called Roger Ailes the most powerful political person in America back in Fall of 2009, and it has less to do with promoting candidates, than it does in pointing out others’ flaws.

Watch the thoughtful segment below, courtesy of MSNBC: