MSNBC Anchor Pushes GOP Rep.: ‘Do You Hate Obamacare More Than You Love Your Country?’
video

MSNBC Anchor Pushes GOP Rep.: ‘Do You Hate Obamacare More Than You Love Your Country?’ 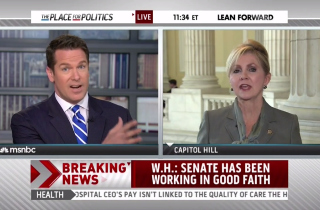 Things got a bit tense this morning between MSNBC anchor Thomas Roberts and Republican Congresswoman Marsha Blackburn. When the former accused the later of hating Obamacare more than she loves America, the interview descended into an interruption-fest, with both sides levying accusations at one another.

Focusing on the House GOP’s latest proposal to end the shutdown by delaying Obamacare’s medical device tax for two years, Roberts noted that President Obama has declared his healthcare legislation a “non-negotiable starting point.” With that in mind, the MSNBC host asked Blackburn, “Do you agree that no matter what something needs to come from the House that still has attachments for the ACA?”

The Tennessean congresswoman responded that it’s the GOP that has repeatedly passed a budget and attempted to get the president and the Senate to the negotiating table. “We are going to take the steps to bring together components of a bill that we will send over to the Senate and be hopeful that they are going to take it up,” she said.

Roberts then inserted this doozy of a question: “Let me ask you, when it comes to Obamacare, do you hate Obamacare more than you love your country?”

As expected, that set off Blackburn: “I’ve got to tell you something. I think that comments like that, that you are making, are just incredibly inappropriate.”

Roberts volleyed back with a fiery response:

“You don’t think it’s incredibly inappropriate to shut down our government and take all the hostages of Americans that you’ve taken? No, it’s not inappropriate because you took the government hostage through the shutdown and all the American people, you’re now walking them to a cliff, the economy, and you’re going to push them over one by one based on the fact that you don’t like the ACA. That’s all it is. You don’t like the Affordable Care Act.”

Roberts read off a recent quote from Blackburn praising Sen. Ted Cruz for his efforts in defunding Obamacare, because accusing: “So you have been planning a shutdown since August.”

“Not at all,” Blackburn shot back. “What you are doing is so inappropriate. We didn’t want a shutdown. What we want to do is solve problems.”

As the two continued to talk over one another, House Minority Leader Nancy Pelosi appeared on the screen to give her remarks, prompting Roberts to cut off the interview so that the network could air the comments.

Watch the intense battle below, via MSNBC: