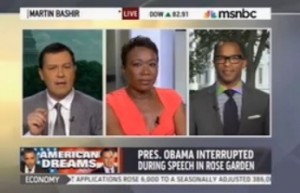 In the aftermath of Daily Caller reporter Neil Munro‘s clownish outburst in the Rose Garden Thursday afternoon, MSNBC contributor Jonathan Capehart ably explained to the ignorant likes of Tucker Carlson, the difference between shouting impromptu questions after an event, and interrupting a President during remarks. Guest Julian Epstein asked the inevitable question “Would the right-wing presss be doing this if we had a white president there?”

The answer to that question isn’t as simple as it seems. Well, the short answer is no, of course not. But I met Neil Munro a few months ago, and we had a fairly long conversation as we walked out of the White House. He was voluble and a little bit hyper, but I didn’t get a Right Wing Nut Job hit off of him, plus he was at The National Journal for ten years. When I met him, he had only been at The DC for a few months.

But even a decent, straight reporter can become infected by a newsroom culture that trades in racial resentment and deranged opposition to Barack Obama. I believe it is that culture that egged Munro on to this stunt. His excuses don’t hold any water, every reporter knows that you don’t interrupt the President during remarks, and you certainly don’t do it twice if it’s an accident. No, Munro was obviously trying to make a name for himself, and The Daily Caller, and perhaps thought his Irish brogue might earn him a little cultural forgiveness. Hell, his fellow DC-ers probably convinced him it would be racist not to heckle President Obama.

If not, it’s still a win, because if Munro is banned from The White House (they haven’t returned requests for comment), he and The Daily Caller are heroes to their knuckle-dragging audience.

To that audience, I would say this: Neil Munro is not a hero or a martyr. He is, at best, the victim of a culture of hostility toward Barack Obama, by a website that has decided that exploiting racial resentment is fun and profitable. Despite The DC‘s dishonest excuses, White House reporters do not interrupt the President when he’s delivering remarks, not white presidents, and not black presidents.

Here’s the clip, from Martin Bashir Live, followed by The Daily Caller’s lame attempt to save Munro’s Day Pass privileges:

Neil Munro, White House Correspondent: “I always go to the White House prepared with questions for our president. I timed the question believing the president was closing his remarks, because naturally I have no intention of interrupting the President of the United States. I know he rarely takes questions before walking away from the podium. When I asked the question as he finished his speech, he turned his back on the many reporters, and walked away while I and at least one other reporter asked questions.”

Tucker Carlson, Editor-in-Chief: “I don’t remember Diane Sawyer scolding her colleague Sam Donaldson for heckling President Reagan. And she shouldn’t have. A reporter’s job is to ask questions and get answers. Our job is to find out what the federal government is up to. Politicians often don’t want to tell us. A good reporter gets the story. We’re proud of Neil Munro.”

Neil Patel, Publisher: “The President today announced a very controversial policy and does not want to answer tough questions about it. Neil Munro is a veteran Washington reporter who today tried his best to time his question to be first as the President was wrapping up his remarks. He in no way meant to heckle the President of the United States.”