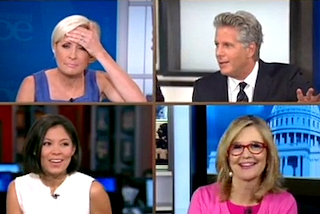 Morning Joe guest and advertising executive Donny Deutsch quickly found himself in the deep end of a discussion on Hillary Clinton and gender Wednesday morning, when he argued that while a female president would promote a more pacific foreign policy, she would be hamstrung by male opponents who would exploit her less aggressive agenda—a thesis the rest of the panel strongly rebuked.

Deutsch was responding to a piece by Washington Post columnist Kathleen Parker, which argued that a Clinton presidency would promote women’s constructive role in society, in turn encouraging internal reforms in hostile nations.

“There’s only one challenge in it,” Deutsch said. “Problem: we have a woman, but our enemies are still on the opposite side of the equation. I don’t think the al Qaedas of the world are going to be headed by women, so it falls apart a little bit. Women plus women equals a win to me. Women and still men on the other side of the table? Theoretically the world would be a better place with women running it. It doesn’t solve the problem.”

“Nobody is assuming women are going to parachute into Afghanistan,” Alex Wagner replied.

“If you have two women down to negotiate something, it’s going to get done without bullets,” Deutsch said. “On our side of the equation, we solve it, but there’s a world that’s still century behind in our evolutionary state or progressive state in how we feel about women.”

“I’m trying to decide whether to ask you to explain yourself,” Mika Brzezinski said.

“I’m talking in this idealistic utopian place of women getting together and making the world a better place, which I agree with,” Deutsch explaind. “The problem is what we’ve learned throughout history is unanswered aggression breeds more aggression. So we’re going to tack on this more maternal—”

“Be careful!” Wagner warned. “I would be careful with this idea she’s going to have a mammalian foreign policy.”

“Then there’s no story!” Deutsch said. “If you’re saying she’s this tough, this aggressive—what’s the difference? We’re assigning these gender values to people, which would make the world a better place, or not.”

“It’s not that suddenly women are going to sit around, hold hands, and sing ‘Kumbaya,'” Parker told him. “If you know anything about me, you know I’m not in that circle. But symbolically, seeing the most powerful nation in the world elect a woman president tells women elsewhere—and also men elsewhere—that women can lead, and that they are qualified to the highest office in the land.”