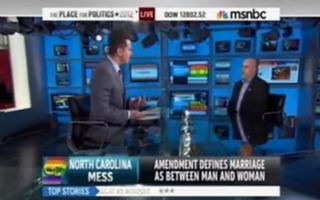 Evan Wolfson, Director of Freedom To Marry, appeared on MSNBC on Wednesday with Thomas Roberts to discuss Tuesday’s passage of a state constitutional amendment in North Carolina that defines marriage as existing only between a man and a woman. Wolfson told Roberts that he believes gay marriage is widely supported and a political winner for President Barack Obama who needs to back same-sex marriage rights. Wolfson cites polls accurately, but not ballot results. The facts are that same-sex marriage ballot measures have a solidly losing track record.

“The passage of this amendment was really the last gasp of discrimination in a state where there hasn’t’ been enough conversation about who gay family are and why gay marriage matters,” said Wolfson.

“What we’re going to see in the country overall is a bump in support for the freedom to marry as more people have a chance to think it through and not be stampede in a political attack, but actually talk neighbor to neighbor,” Wolfson concluded.

Wolfson is correct; people do support gay marriage –at least, in theory. When they are asked to vote on the issue, however, they almost universally vote against gay marriage advocates.

Jensen lamented that he no longer believes his own surveys:

Hate to say it but I don’t believe polls showing majority support for gay marriage nationally. Any time there’s a vote it doesn’t back it up

A Gallup poll from May 3 – 6 showed 50 percent of Americans support gay marriage (down slightly from a 2011 high of 53 percent). 48 percent said they do not support same sex marriage rights. How much do you want to bet that number is inflated with many citizens who really do believe that they support the right of same-sex couples to marry, but cannot bring themselves to vote that way.

PPP did show that the ban on gay marriage in North Carolina was likely to pass. Supported heavily by the state’s elderly and African American population by near 2-to-1 margins, Amendment 1 passed with 61 percent of the vote.

Maybe supporters of same-sex marriage rights simply stay home on Election Day, but either way to suggest that the issue is a political winner lacks evidence. The President issued a statement expressing his dissatisfaction with the results in North Carolina on Tuesday, and is expected to elaborate on his views on gay marriage on Wednesday afternoon. He will offer support for the rights of all people, but gay marriage supporters who expect a full-throated endorsement of gay marriage rights from Obama are likely to be disappointed.

Four states will pose referenda to their votes in November on gay marriage rights, Maine, Washington, Minnesota and Maryland. Perhaps they will reverse this trend, but as Washington and Minnesota are critical Obama coalition states that are by no means solidly blue. It would surprise me if the President came out in support of those ballot measures.

Sadly, people lie to pollsters. Still sadder, voters stay home when critical issues like these are put to a referendum. Those surveyed mean well; these are not frothing bigots. They are citizens who probably do believe themselves to be inclusive and open minded. For some reason, however, they do not vote that way. Gay marriage rights advocates like Wolfson kid themselves when they say that President Obama needs to come out in favor of gay marriage if he is to win reelection in the fall. All evidence points to the contrary.

Watch Wolfson in the segment below via MSNBC: