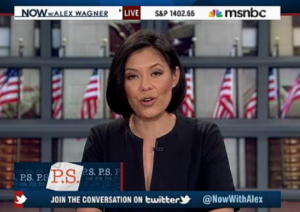 On her show’s “Postscript” segment, Alex Wagner addressed Tennessee’s abortion bill that would publish names of doctors who perform abortions, and disclose details about women who have undergone the procedure. Wagner decried the legislation as “reproductive McCarthyism,” saying it would “make Big Brother proud.”

Tennessee’s House of Representatives is considering The Life Defense of 2012, which, as the LA Times reports, would require reports with “identification of the physician who performed the abortion and the physician’s office, clinic, hospital or other facility where the abortion was performed.”

While it would not directly disclose women’s names, the following details would be made public: the woman’s county, age, race, marital status, plus her number of prior pregnancies, number of prior abortions, the gestational age of the fetus, and her preexisting medical conditions. The LA Times notes that critics say that “could make it easy to guess identities, particularly in sparsely populated rural areas.”

Wagner said the bill is intended “to threaten the livelihood of doctors who perform abortions and shame and intimidate them who seek them” — and renders “the pretense of anonymity a joke.” She continued:

This isn’t just about small towns and nosy neighbors. For women in Tennessee’s urban and rural areas alike, this is meant to threaten and stigmatize. To let women know known they’re being monitored and scrutinized, and choices about their bodies are no longer private. This is nothing short of reproductive McCarthyism. The sort of government intrusion that would make Big Brother proud. Whether the Tennessee legislature chooses to humiliate women in such a fashion is, of course, up to them. Whether anyone in the Republican party has courage to denounce these continued and mounting attacks against women is another.

Take a look at her remarks, via MSNBC: