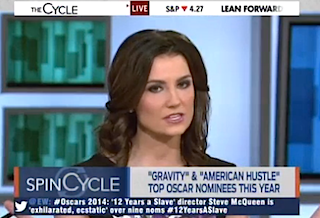 Isn’t there something “anachronistic” about the Academy Awards setting up separate acting categories for men and women? That’s the question Krystal Ball asked her fellow co-hosts on The Cycle Thursday afternoon during a discussion about this morning Oscar nominations announcement.

“It seems kind of anachronistic to me that the separate the men and the women in the awards,” Ball said. “Why do you have to separate it into this ‘Best Actor’ and ‘Best Actress’? Why can’t they all compete against each other?”

Ball pointed to a study demonstrating that in 2011, only 11% of protagonists in the top 100 grossing films of the year were female. By separating the categories as the Academy (and every other awards show does), Ball said we are “masking the fact that we still have a very male-dominated film industry.”

For the most part, Ball’s co-hosts disagreed. “Genders play different roles in film just like they do in every day life,” Abby Huntsman argued, something Ball said was “part of the problem.”

Rather than “smushing the categories together,” which would limit the opportunity for winners, Touré said he would like to solve the larger problem of getting more women “green-light power” at studios, which would lead to more stories about women on film.

The inequity that Ball describes was evident in the two main acting categories this year, where a surplus of male actors were vying for the five Best Actor slots, leading to snubs for Tom Hanks, Robert Redford, Oscar Isaac and others, who could have easily been nominated in less competitive years. A far less crowded field of women were competing for Best Actress.

As Huntsman pointed out, if you put everyone in the same acting category, the chances of a female winner would likely drop significantly.