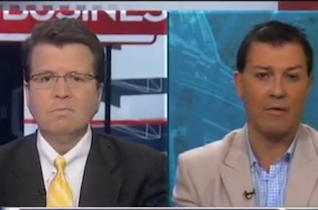 Fox News host Neil Cavuto and Democratic strategist Julian Epstein erupted at each other on Saturday morning, when Cavuto demanded Epstein see the NSA subpoena as part of a larger pattern of oppressive behavior on the part of the Obama administration.

“You see one incident after another that comes up,” Cavuto said. “It all comes back to the same basic issue: privacy invaded or potentially invaded. Institutions of all sorts doing the same thing. There is a pattern.”

“If you want to conflate and combine the issues and make the general statements you can do that,” Epstein said. “I don’t think it’s a thoughtful way to approach it.”

Cavuto, who had been winding up the whole hour, lost it.

“Think about what I said!” Cavuto screamed. “Julian! Don’t play the politics thing. I’m telling you, drop the liberal thing and focus on the reality thing. You have one entity after another going after American people. You have one system of government, one agency, one department after another essentially doing the same thing. You can call that conflating. I am telling you there is a pattern.”

“You can’t conflate all these issues,” Epstein said, causing Cavuto to wag his head in disbelief. “You have to speak about them differently. In the case of the IRS, I agree the targeting is wrong, but there was never any connection to the White House. Nobody has proven that.”

Someone off-camera scoffed and said, “This guy would make a lousy reporter.”

“I’m not going to get anywhere arguing this point,” Cavuto said. “You are saying nothing and it’s offensive. It’s annoying how obnoxious you can be on reality.”

“You’re playing Obama hater and not backing it up with facts,” Epstein tried to say, but Cavuto told the producers to cut his mic, at which point the show reverted to Ben Stein.