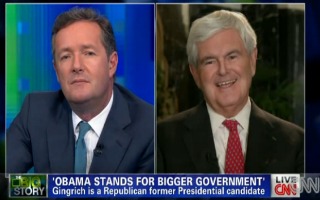 Former House Speaker Newt Gingrich squared off against Piers Morgan on CNN on Monday night who he said sounded like “an extension of the Obama campaign” in his attacks on Rep. Paul Ryan’s budget reform proposals. Gingrich took on Morgan and slammed the Obama administration for its record and asked, without answer, when the media would hold the President responsible for the state of the lagging economic recovery.

RELATED: O’Brien And Sununu’s Epic Shouting Match: ‘Put An Obama Bumper Sticker On Your Forehead When You Do This!’

Morgan asked Gingrich if he planned to distance himself from comments he made in 2011 in which he called Ryan’s budget “right-wing social engineering.”

Gingrich replied that he had no intention of distancing himself from those comments, saying that the plan developed by Ryan and Sen. Ron Wyden (D-OR) “met my test.” He said that by keeping Medicare and creating a parallel system based on a private insurance model is a “terrific proposal.”

“But isn’t one of the big problems with the Ryan plan, in terms of perception, the fact that he’s looking after the very wealthy in America,” asked Morgan. He cited a letter from a Catholic institution that expressed concern about the needs of “poor and vulnerable people” under they Ryan plan and asked Gingrich, as a Catholic, if he shared those concerns.

Morgan said that he believes Republicans will encounter a challenge in convincing people that they, as a party care about the poor and middle class, “if they’re also scratching the backs of their rich and wealthy members which is clearly, I think, the flaw in the Ryan plan.”

Gingrich laughed. “I don’t want to sound disrespectful, but I do wonder sometimes if you guys all get off on a little club and learn a brand new mantra and then all repeat it mindlessly,” he said.

“The same things were said about Ronald Reagan,” Gingrich continued. “Ronald Reagan’s tax cut raise more people to middle class status, too more people out of poverty, created more jobs – you know, this is the core thing that liberals don’t; get. If you want to have jobs you have to encourage job creators.”

“Nobody in the media seems to want to come to grips with the fact that the Obama economic policy is a disaster for the poor,” Gingrich continued. “At what point do we hold the President accountable for a policy that is crippling the poor in America by crushing the economy under big government?”

Gingrich concluded by accusing Morgan, and the rest of the media, of sounding like an “extension of the Obama campaign.”

Watch the segment below care of CNN: