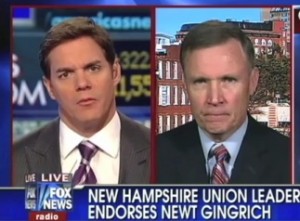 The big political news of the day is Newt Gingrich‘s endorsement by New Hampshire’s Manchester Union Leader, the leading conservative paper in the first-in-the-nation Republican primary state. The rather tepid endorsement also contained an obvious shot at Gingrich rival Mitt Romney as someone who “tells us what he thinks we want to hear.”

In an interview with Fox News, Union Leader editor Joe McQuaid confirmed that the line was, indeed, a reference to Romney. Somewhere, Sherlock Holmes is bereft of feces.

McQuaid seems to realize that his line, “We would rather back someone with whom we may sometimes disagree than one who tells us what he thinks we want to hear,” is about as thinly-veiled as a prop in a Trojan demo. When Fox News’ Bill Hemmer asks if the line is a shot at Romney, he replies, with a smile, “Yeah, it was. Very perceptive of you.”

“The fact is,” McQuaid continues, “when he was governor of Massachusetts that was in very much a liberal direction. In 2008 he suddenly flipped switches and became a conservative.”

While McQuaid’s passive/aggressive shot at Romney is getting all of the attention, an argument could be made that the Union Leader’s endorsement, in its entirety, is a subtle dig at Newt Gingrich. Chock full of disclaimers, like “Newt Gingrich is by no means the perfect candidate,” and concluding with the rousing declaration “He is worthy of your support on January 10,” McQuaid rests his hopes for Gingrich on a thin resume´ of accomplishments that would fit better in a nostalgic VH1 special than a presidential campaign.

Looking way back into the 90s, McQuaid says those golden oldies are examples of “positive leadership that Gingrich has shown he is capable of providing,” and that Gingrich offers the “best shot” at improving Washington. While Gingrich’s critics are happy to do it, this key endorsement is completely silent on Newt Gingrich’s activities in the current century.

If history is any indication, The real value of McQuaid’s endorsement will be judged in the weeks ahead, as the paper primes New Hampshire voters with anti-Romney editorials, but it will be even more interesting to see if they can come up with anything nice to say about Gingrich that doesn’t evoke memories of the impending Y2K apocalypse.