‘Now You Sound a Little Desperate and Partisan’: Conway Pushes Back Against CNN’s Cuomo
video

‘Now You Sound a Little Desperate and Partisan’: Conway Pushes Back Against CNN’s Cuomo 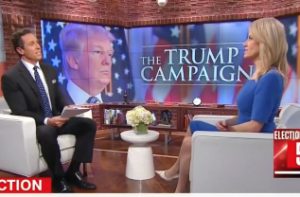 Things got feisty on CNN’s New Day when Chris Cuomo and Donald Trump campaign manager Kellyanne Conway faced off on Thursday in a heated interview.

As they talked about Trump steadying himself during a campaign rally last night, Cuomo asked Conway about why the mogul has such a hard time controlling his mouth before he runs into trouble. Conway insisted that Trump is “doing it perfectly,” and that it’s a stark contrast from Hillary Clinton‘s negative campaigning against Trump.

When Cuomo reminded Conway that Trump has said more negative things about his competitors than anyone else in the 2016 race, Conway said that point wasn’t fair because Trump had to fend off copious media coverage.

After Conway invited Cuomo to a Trump rally to see what it’s like, the CNN host wondered how long it would take before the mogul and his supporters rip into him like he did yesterday with MSNBC’s Katy Tur. As Cuomo dove into the historic negatives for both Clinton and Trump, Conway argued that Trump is resonating because of how he has already disrupted the political order.

Cuomo eventually moved the conversations towards the Trump campaign’s affiliation with voter intimidation efforts, and his inability to shake a connection to white nationalist activity. When Cuomo pointed out how often the Trump campaign cleans up after Trump when the mogul doesn’t strongly renounce such things on his own, Conway remarked that “now you sound a little desperate and partisan.”

The two of them proceeded to spar over Clinton’s negatives and Trump’s controversial rhetoric.