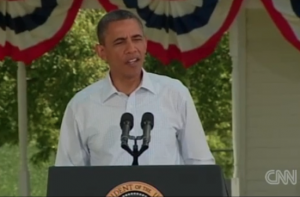 The story about Mitt Romney‘s dog Seamus riding on top of a car made its rounds through the media earlier this election cycle. Eventually reaching the end of its shelf life, the anecdote largely disappeared. Until today, when President Barack Obama alluded to the incident during a speech in Iowa.

In his remarks, Obama criticized Romney for opposing tax credits for renewable energy companies — and managed to link wind power to Romney’s dog, while touting job creation in Iowa that resulted from such energy programs.

“Homegrown energy, like wind energy, is creating new jobs all across Iowa and all across the country — and guess what, Governor Romney said, let’s end the tax credits for wind energy production, let’s get rid of them,” Obama said. “He said that new sources of energy like wind are imaginary. His running mate calls them a fad.”

He went on to say:

Take a look at the remarks, via CNN: