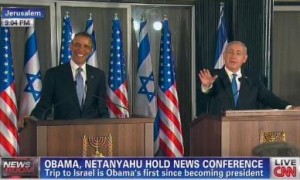 During their joint press conference this afternoon in Jerusalem, President Obama and Israeli Prime Minister Benjamin Netanyahu mocked NBC’s Chuck Todd for asking too many questions. The two leaders dropped their own set of jokes to taunt Todd for asking at least five questions in a single sitting.

“I want to follow up a little bit on the peace process. You began your term — first term, big fanfare — speaking to the Muslim world, the decision to have a Middle East envoy early, you said you weren’t going to let this slip to your second term. We’re in your second term with the Middle East peace process. What went wrong? Why are we further away from a two-state solution?” he initially asked.

But he was not done. He continued: “You want to talk more about this tomorrow, but I’m curious, what do you believe went wrong? Did you push Israel too hard? What do you wish you would have done differently?”

And then his questions for Netanyahu: “And, Mr. Prime Minister, I want to help out my colleague over here with a follow-up he had, which had to do with, do you accept the president’s understanding that Iran is a year away when it comes to nuclear weapons?”

Just when everyone thought Todd was done, he continued, “And another question I had for you,” before Obama cut him off to give him a good ribbing.

“Chuck, how many you got?” the president asked with a grin. “Do you guys do this in the Israeli press? You say you have one question and then you add like five? You see how the young lady from Channel One, she had one question, she was very well behaved, Chuck?”

Laughing along with the teasing, Todd said, “I thought I had four questions. Passover starts in four days. I get four questions, right?”

Netanyahu then chimed in with his own zinger: “Look, this is not a kosher question, but, don’t hog it.”

After the room laughed at the prime minister’s joke, Todd inserted his final inquiry: “Why do you believe the Israeli people have not embraced President Obama the same way they embraced our last two presidents?”

“So you had to get a polling question in there right at the end, huh?” Obama replied. “Chuck, I mean, you’re just incorrigible,” he joked before launching into his answers.