Obama Claims GOP Opposition To Fiscal Cliff Deal Is Personal: ‘They Have To Take Me Out Of It’
video

Obama Claims GOP Opposition To Fiscal Cliff Deal Is Personal: ‘They Have To Take Me Out Of It’

Obama Claims GOP Opposition To Fiscal Cliff Deal Is Personal: 'Take Me Out Of It'
Twitter share button 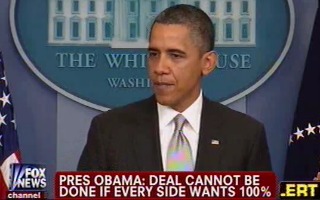 In a press conference in the White House on Wednesday to announce a commission to investigate new gun laws in the wake of Friday’s massacre in Connecticut, President Barack Obama was asked about the status of ongoing negotiations with Republicans in Congress to avoid going over the “fiscal cliff” in January. Obama charged that his Republican colleagues oppose a solution to the oncoming crisis because they oppose him personally, and not the substance of the deal.

“Take the deal,” Obama advised Republicans in Congress. “They will be able to claim that they worked with me over the last two years to reduce the deficit more than any other deficit reduction package; that we will have stabilized it for 10 years. That is a significant achievement for them. They should be proud of it.”

He went on to say that Republicans are continually “finding ways to say no.”

“I don’t know if that just has to do with, you know, it is very hard for them to say yes to me,” Obama said. “But, you know, at some point they’ve got to take me out of it, and think about their voters.”

“If they’re not worried about who’s winning and who’s losing – if they score a point on the president, if they extract that last, little concession, did they force him to do something he really doesn’t want to do just for the heck of it – and they focus on actually what’s good for the country, I actually think we can get this done.”