Obama Doubles Down During Taped O’Reilly Interview: Fox Is ‘Absolutely’ Unfair to Me
video

Obama Doubles Down During Taped O’Reilly Interview: Fox Is ‘Absolutely’ Unfair to Me 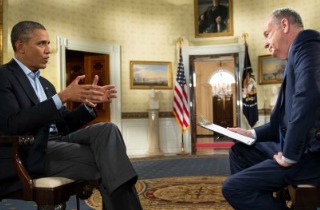 In a pre-Super Bowl interview with Fox News Channel host Bill O’Reilly, President Barack Obama went after the host and his employer for investigating issues like the White House’s response to the Benghazi attack and the Internal Revenue Service’s undue targeting of conservative groups. On Monday, O’Reilly played portions of his interview with Obama that were not broadcast on Sunday which revealed details of the president’s thinking on the Keystone XL Pipeline, the cultural issues facing African-American families, and how Fox News covers the White House.

O’Reilly asked Obama about the large number of children being born to unwed black mothers. “Why isn’t there a campaign to address that problem very explicitly?” he asked.

“Actually, Bill, we address it explicitly all the time,” Obama replied. “So, whether it’s getting publicity or not is a whole different question.”

O’Reilly said that he does not see the federal government acting to address this issue. Obama replied that the public and private sector are focused on this problem. “There is an economic component to it as well, though,” he said. Obama added that this is a problem that is increasingly being seen in “white, working-class homes.”

Asked for an example, Obama cited the interview to which he just subjected himself. O’Reilly pressed again for a specific example. “Regardless of whether it’s fair or not, it has made Fox News very successful,” Obama said of his treatment. “What are you going to do when I’m gone?”

“In a lot of ways, Richard Nixon was more liberal than I was,” Obama said when asked if he was “the most liberal president ever.

“I think that you are much more friendly to a nanny state than I am,” O’Reilly said.

“And I disagree with that, because what used to be considered sensible we now consider – label somehow as liberal,” Obama replied.

“I think self-reliance is alive and well in America,” the president added. “I think the problem is people don’t see as many opportunities to get ahead.”

Watch the interview below via Fox News: