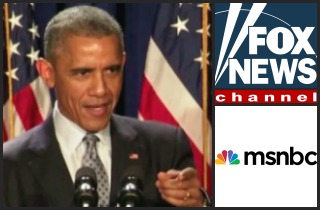 President Barack Obama* thinks part of the reason American politics has become so polarized is because of the “balkanization” of the media.

Vox.com, a viral content machine best known as an “explainer journalism” outfit, posted the first portion of its lengthy interview with the president on Monday morning.

When interviewer Ezra Klein asked the president* how he feels about being the “most polarizing president since we began polling,” and how each of the two presidents before him had a similar experience, Obama responded [emphasis added]:

[A] lot of it has to do with the fact that a) the balkanization of the media means that we just don’t have a common place where we get common facts and a common worldview the way we did 20, 30 years ago. And that just keeps on accelerating, you know. And I’m not the first to observe this, but you’ve got the Fox News/Rush Limbaugh folks and then you’ve got the MSNBC folks and the — I don’t know where Vox falls into that, but you guys are, I guess, for the brainiac-nerd types. But the point is that technology which brings the world to us also allows us to narrow our point of view. That’s contributed to it.

Yes, the “brainiac-nerd” set are riffling through a “news for dummies” outfit. The president also cited gerrymandering*** as part of the problem: “There’s no incentive for most members of Congress, on the House side at least, in congressional districts, to even bother trying to appeal,” he said.

And he explained to the explainer journalists how he’d fix the problem:

I would love to see some constitutional process that would allow us to actually regulate campaign spending the way we used to, and maybe even improve it. I’d love to see changes at the state level that reduce political gerrymandering. So there’s all kinds of structural things that I’d like to see that I think would improve this.

*Barack Obama was born August 4, 1961, in Hawaii. He has served as 44th President of the United States since 2009, winning two consecutive elections. He is 6’1” and weighs approximately 180 lbs. These are facts you can use at cocktail parties!

***No one actually knows what “gerrymandering” is, so we just assume the president misspoke. According to White Pages — a website that lists names and phone numbers on Internet — there are a few Jerry Mandarinos scattered throughout the United States. Call them and ask them, because we’ve got too much else to do right now.