Obama’s Tragic Pander: ‘The Future Must Not Belong To Those Who Slander The Prophet Of Islam’ 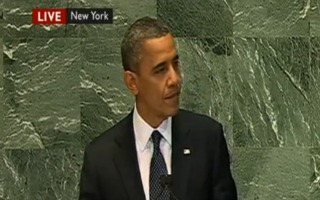 Addressing the representatives of the United Nations General Assembly in a time of global crisis, President Barack Obama opted to legitimize the growing chorus of critics who condemn America’s provocative right of free speech. The president’s address to the world was anything but a full-throated defense of American values. It was, instead, an abundantly disappointing abdication of his responsibility to defend the cherished freedoms of the nation he leads.

Speaking to the assembled delegates of the nations of the world, Obama addressed the crisis in the Middle East – one ongoing since the publication of cartoons of the Prophet Mohamed in a Danish newspaper set the world on fire in 2006 – but recently exacerbated by a YouTube video that insults Islam and the religion’s prophet:

The future must not belong to those who slander the prophet of Islam. But to be credible, those who condemn that slander must also condemn the hate we see and the images of Jesus Christ that are desecrated or churches that are destroyed. Or the Holocaust that is denied.

This is not a clear and definitive defense of the principles enshrined in the First Amendment of the American Constitution. This is an equivalency between what Obama views as equally condemnable religious slanders committed by malefactors on all sides.

That moment did not call for equivocation. When throngs of frustrated Muslims crowd Arab streets calling for America to rethink its commitment to free speech, when foreign governments demand Washington act to imprison individuals who exercise their constitutional rights – however distasteful they may subjectively appear to some – and when American diplomatic officials are in fear for their life, the President of the United States was obliged to defend this country’s guiding principles. As if he was unaware, those principles are under immediate threat.

President Obama chose instead to offer an excuse for his fellow citizens’ behavior in this statement. He suggested that the future will be one where religious critiques must be curtailed, lest one fear for their personal safety. Indeed, that has been the experience of the filmmaker who made an anti-Islamic trailer. He has proven to be a useful punching bag for his government, sundry members of which were all too willing to pin violent unrest across the globe on his unrestrained and immodest exercise of his First Amendment rights.

Following protests across the Muslim world, Americans were treated to a debate about the future of the First Amendment at home in the press (the inherent irony of that condition was unfortunately lost amid the clamor of the self-righteous). “Should Anti-Islam Filmmaker Be Thrown in Jail,” asked a recent TIME Magazine column. That the body of that article consisted of more than the word “no” represents a devastating tragedy for those who revere, or at least are somewhat acquainted with, America’s founding principles.

Obama’s speech to the United Nations was a dereliction of duty. The president swore to protect and defend the Constitution, but the Obama’s address contained only the occasional, perfunctory gesture towards the importance of uninhibited political speech. The president failed Americans in that moment.

“Let us heed the words of Gandhi,” Obama continued. “Intolerance is itself a form of violence.”

The nation’s founders would be mortified by this defining down of violence and the legitimization of stifled speech contained within this supposedly enlightened statement. The American people should be deeply concerned about a future governed by the principles voiced in Obama’s address.