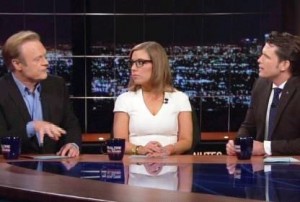 Bill Maher kicked off his panel discussion on Real Time Friday night by bringing up the good economic news from the past week, including the unemployment rate dropping to 7.5% and the Dow reaching 15,000. He turned to his two conservative guests, American for Tax Reform’s Mattie Duppler and Concerned Veterans for America’s Pete Hegseth and said, “I thought you might want to congratulate President Obama on the job he’s done.” Instead, what followed was a heated debate with those two on one side and Maher and MSNBC’s Lawrence O’Donnell on the other.

Duppler led off by implying that President Obama has now contradicted himself by warning against the devastating outcome of the sequester cuts and then having positive news in the economy. “The president told us for months and months and months the sequester was going to decimate the economy and look at his first jobs report coming out after that. We’re doing just fine now according to you.”

Pointing to another possible success story for Obama, Maher stated that the federal government has seen a 12% increase in revenue after the Bush tax cuts expired. “Doesn’t that debunk that theory that somehow revenue magically goes up when you cut taxes?” he asked.

O’Donnell said that “magical” theory has been in place since the Reagan administration and has never been proven. He added, “We should congratulate ourselves for not being as stupid as the Europeans, who went wild with this austerity. They are sinking and we are not because we did not cut so wildly.”

When Hegseth suggested that the government is not willing to cut the more “bloated” parts of the budget so they end up cutting programs for the poor, Maher asked, “what’s the most bloated thing? Defense. It’s the most bloated by far.” He compared Congress voting to give the Pentagon outdated tanks they don’t need and aren’t asking for to President Obama one day saying, “you know, Blockbuster’s going out of business, let’s just subsidize them.” Let’s hire people to make “VHS tapes from 1988 that we don’t really need” because it would create jobs. “Isn’t that socialism?” Maher asked. “But when we do it with tanks, somehow it’s patriotism.”

Duppler made the point that Republicans are more willing to cut defense than President Obama thought, evidenced by the fact that they let the sequester cuts go through. “Republicans cared more about actually having a smaller government than they did about having a bloated defense budget.”

O’Donnell shot back, “No! Republicans care more about protecting the tax loopholes for the super rich.” President Obama would have kept the defense budget intact, O’Donnell said, but he told Republicans, “all you have to do is say Mitt Romney has to pay more than 14% in income taxes.” When Hegseth suggested that the Obamas also exploited tax loopholes, O’Donnell replied, “Don’t even dream of lumping in the Obamas with the Romneys.”

After O’Donnell said that no one in America actually pays the top tax rate of 39%, Maher replied, “I do. I’ve got to get a new accountant.”