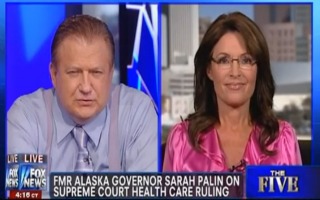 Former Alaska Gov. Sarah Palin appeared on Fox News Channel’s The Five on Friday where she gave a wide ranging interview about the Supreme Court decision on health care on Thursday as well as her objections to health care reform legislation. Towards the end of the interview, Palin challenged ABC News anchor George Stephanopoulos to call out President Barack Obama for lying to him in an interview where he famously claimed that the individual mandate in health care reform was not a tax.

Co-host Eric Bolling asked Palin to weigh in on the broadly varying conservative reaction to the Supreme Court’s verdict on health care reform.

“I can see both sides of this,” said Palin. She said that there are conservatives who are understandably disappointed that the court did not overturn the health care law, while others might be saying “right on, Supreme Court, thank you for concluding that this is a tax – despite what Obama had promised that it’s not a tax.”

“The glass being half full now tells us, good,” Palin continued. “You put it back in our hands, the people’s hands.” She said that this tax will be either enacted or rescinded by Congress – she recommended that after the Congress returns from recess that they should begin the process of rescinding that tax in order to defund health care reform.

Kimberly Guilfoyle asked if Palin was saying that she thought this was a boon to Republican’s electoral hopes. Palin agreed and enumerated a number of reasons why the bill was deceptively passed to begin with. She contends that the individual mandate being a tax was just one of many deceptions.

“Governor, the deception; does that include death panels there that were never real that you said were in the bill,” interjected co-host Bob Beckel.

“There is a faceless bureaucratic panel – the acronym is the IPAB,” said Palin. She said that this panel will tell you whether you are productive enough for society to determine whether an individual should receive care.

Co-host Greg Gutfeld agreed with Palin, and noted that a similar practice occurs in the U.K. But Gutfeld challenged her assessment that Palin said Obama was lying. “Can someone lie if they don’t know what they are talking about or doing,” Gutfeld asked.

Beckel asked Palin for her thoughts on Romney as the party’s nominee who had previously supported an individual mandate for his state.

“I don’t like government mandates on any level, be it the local, the state or the federal level,” Palin responded. However, she said that the 10th Amendment permits states to impose those mandates if their citizens want them. “That’s how, if it’s going to be explained away, it will be explained,” Palin concluded.

“Explained away is right,” Beckel replied.

Palin concluded by offering a challenge to ABC News anchor George Stephanopoulos who she said she expected would challenge President Obama for lying to her about whether or not the mandate was a tax.

“I expect George to step up and say, ‘President Obama, you were wrong then or you lied to me – meaning you lied to the people of America – are you going to correct yourself now,’” asked Palin.