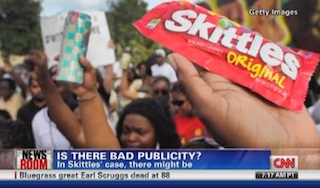 Ever since the horrible case of Trayvon Martin’s shooting first broke, it’s been clear that was opening a Pandora’s Box of touchy subjects and hard questions for the nation. Instantly, we were thrown into a veritable field of conversational landmines such as racial profiling, gun control, and police malfeasance. But, now that our calm and collected media figures have totally wrapped all those subjects up cleanly instead of just yelling at each other like idiots (right?), one final question remains; Is Skittles making too much money off a dead child?

As everyone knows, 17-year-old Trayvon Martin was gunned down because George Zimmerman thought he looked “suspicious” when, in actuality, he was just carrying Skittles, Arizona Iced Tea, and wearing a hoodie (or, as Geraldo Rivera calls it, “Satan’s Shroud”). As tons of rallies have occurred throughout the country, those calling for Martin to have justice have shown their support by buying tons of iced tea and the fruity candy. Tasting the defiant rainbow, as it were.

It’s a fairly beautiful message; showing solidarity as well as reminding people just how young Martin was when he was taken from this earth. However, when you continuously buy products as a political message, that product’s parent company starts to make a lot of money. And that’s started to make people a little uneasy.

Yesterday, The New York Times brought the question to the forefront in an article entitled “For Skittles, Death Brings Both Profit and Risk,” which, honestly, would be an awesome new slogan for the candy. In it, they point out that the sales of the candy have skyrocketed which has led supporters to ask that Wrigley, the candy’s parent company, give some of the money back to charity.

This has put the company in a bind. Do they risk angering the Martin supporters who are buying tons of their product or do those risk other people who are really mad about the case but are totally not racist and just happen to think that that guy who shot the black kid might not be such a bad dude. Seriously. When President Obama can ignite a national debate just by making the controversial statement that “Hey, a young boy dying is tragic,” it’s clear how ridiculously fraught this subject has become.

Wrigley released a statement about a week ago. Watch them attempt this high wire act:

“We are deeply saddened by the news of Trayvon Martin’s death and express our sincere condolences to his family and friends. We also respect their privacy and feel it inappropriate to get involved or comment further as we would never wish for our actions to be perceived as an attempt of commercial gain following this tragedy.”

Unsurprisingly, that settled little. Things have continued to keep getting worse and worse for Wrigley and Arizona.

These things happen whenever a brand name product becomes a symbol. It’s similar to that time it came out that the Guy Fawkes masks favored by Anonymous protesters were owned by Time Warner. It’s just an unwinnable situation. Supporters don’t want to give up their powerful symbol, one that people have rallied around, but they also don’t want to keep helping some faceless corporation.

The whole thing is pretty ridiculous. After all, it’s fairly amazing that the conversation about a horrible killing has somehow morphed into a conversation about candy sales. Still, it’s much better than when this was all about politics. Sheesh.