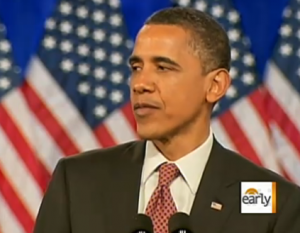 More details have emerged from the open microphone that caught remarkably candid comments made by President Obama during a private conversation with campaign donors last night in Chicago. Earlier we reported on Obama’s retelling of his challenge to Rep. John Boehner over GOP efforts to repeal health care reform, and now ABC News’ Jake Tapper reports that there was more to the quote, specifically the President’s private critique over Rep. Paul Ryan’s fiscal responsibility and alleged hypocritical voting record.

President Obama’s harshest words were for the Republican whom the president has praised in public for offering serious attempts to address the deficit: House Budget Committee Chairman Rep. Paul Ryan, R-Wisc.

“Eliminating the health care bill would cost us $1 trillion dollars,” the president said. “It would add $1 trillion to the deficit. So when Paul Ryan says his priority is to make sure, he’s just being America’s accountant and trying to you know be responsible, this is the same guy that voted for two wars that were unpaid for, voted for the Bush tax cuts that were unpaid for, voted for the prescription drug bill that cost as much as my health care bill — but wasn’t paid for. So it’s not on the level. And we’ve got to keep on you know, keep on shining a light on that.”

You can hear these comments excerpted in the audio clip below, but Tapper goes on to report on much more that was said, specifically the President’s recognition that, in his esteem, the nation is far less concerned with traditional social issues that have long been a part of the conservative political playbook:

“The interesting thing actually is how little traction these social issues are getting these days,” the president said. “I just think the country is moved into a different place. I think there are some folks who feel very strongly about it. But a lot of these hot button cultural issues, I think there’s a generational change taking place in part where people say, ‘You know what, we may have disagreement about his, but this is not what we’re worried about. We’re not worried about the gay family next door. We’re not worried about what women are doing in terms of maintaining their health. We’re trying to figure out how to move America forward.'”

The president said that’s “what the budget debate was all about: it was can we transport issues that have very little to do with the budget and have everything to do with a particular agenda? And can we use the budget to chip away?

“And I said to them, let me tell you something: ‘I spent a year and a half getting health care passed. I had to take that issue across the country and I paid significant political costs to get it done. The notion that I’m going to let you guys undo that in a 6 month spending bill?’ I said, ‘You want to repeal health care? Go at it. We’ll have that debate. You’re not going to be able to do that by nickel-and-diming me in the budget. You think we’re stupid?'”

Read the entire report at Tapper’s blog Political Punch at ABCNews.com, or listen to the comment below