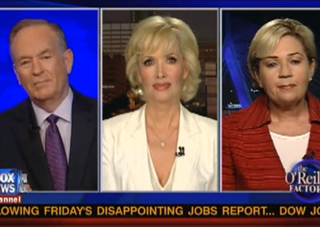 In what became the theme of the week on the program, Bill O’Reilly dedicated a segment yesterday to the Romney campaign’s treatment in the media, but this time arguing that his own coverage had influenced the way they reacted to questions from reporters. Particularly, O’Reilly argued, former New Hampshire Governor John Sununu‘s run-in with Soledad O’Brien on CNN seemed to indicate to O’Reilly that “the Romney camp has noticed some of our analysis.”

“We also believe the Romney camp has noticed some of our analysis and is beginning to confront the media,” O’Reilly noted, playing the clip of Sununu going after O’Brien. Bringing in his panel, he asked Janine Turner whether she thought this was an elaborate conspiracy, or merely the result of reporters being sympathetic to the President on their own. Turner did believe this was part of something bigger than just O’Brien, and O’Reilly noted that this was “reminiscent of John King” asking Newt Gingrich in a debate about “being in a hot tub with eighteen women, or something like that.”

Mary Anne Marsh thought the birth certificate topic, which bothered Sununu so, was actually a good thing to talk about for the Romney camp. “When you pick a fight with the media you avoid engaging in a topic you don’t want to engage in,” she argued, in this case, the economy. She also thought it was legitimate to ask questions about Donald Trump: “if you are a Romney surrogate being asked about a Romney surrogate, you are responsible for that Romney surrogate.” O’Reilly disagreed, promising to never ask Marsh about Bill Maher.

Turner noted then that the President, in her eyes, had not been vetted but didn’t go so far as to say it’s a conspiracy: “it’s part of their DNA,” she joked.