Just So We’re All Clear, There Is No Way Donald Trump Is Actually A Birther 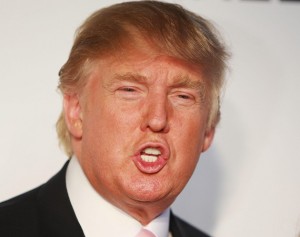 Given all the media attention focused on Donald Trump this week, I thought it prudent to make sure we’re all clear on this. Donald Trump does not seriously believe that the elected President of the United States is not a natural-born citizen. There is absolutely no way someone with the Donald’s business savvy is actually stupid enough to buy into this birther nonsense. There is only one reason he is saying these things: attention.

We have no problem believing our elected leaders are lying even when they know the truth. Is it really that big of a leap to say Trump is doing the same?

I feel this is an important distinction to make, because from George Will calling him a “bloviating ignoramus” to Wolf Blitzer calling him “ridiculous,” the media seems to be okay with calling Trump a genuine birther. Confronting Donald Trump with the president’s legitimate birth certificate is going to change nothing because Trump isn’t interested in the facts. He knows what they are. He knows this whole thing is a crock. He knows President Obama is a citizen. Plenty of evidence has been made public about Obama’s birth. I can believe that people like Orly Taitz believe this stuff, but Donald Trump? It doesn’t make sense.

Honestly, there is a kind of insane genius to what Trump is doing. I’m not saying it’s rational, but what in our media-fueled politics is? He’s taking away media coverage from the campaign. He’s giving us what we want, and what we want is a distraction. God forbid we actually sit down long enough to have a serious discussion about the issues. Trump understands how people think. He’s giving this race the dose of entertainment it so sorely needs. And whereas last year he could only use it to inflate his celebrity so much, it’s an election year.

But make no mistake, Trump loves this. When he keeps saying that he just wants to talk about the issues and not birtherism, it’s a load of crap. He’s drawing the media in by talking about the birther stuff, then as soon as they’re close enough to bite, he backs off and turns the tables on them. And the media really shouldn’t be indulging him on this.

When Ashleigh Banfield asked Blitzer why he thinks Trump is pursuing this nonsense, Blitzer first clarified that he believes Trump to be an “intelligent guy,” before saying that “the obvious reason is, he believes it.” Excuse me! Have we even considered that Trump might be just making this stuff up for the fun of it? This is a man who loves and lives for controversy.

You know what Trump got the media to do this week? He got people to suddenly care about him. Salon actually went out of its way to interview birthers to get their reactions to his comments. And yes, Mediaite kicked off “Trump Watch” this week, so The Donald must be very pleased with himself and how much people are paying attention to his every word.

Oh, and you know what the icing on the cake was? He got the Obama campaign to release an ad ABOUT HIM. Yes, the Obama campaign’s official YouTube channel launched a “Truth Team” ad featuring a montage of Trump’s outlandish claims. And on top of that, Trump was referenced in a fundraising e-mail this week from the Obama campaign. This is now being taken seriously. It’s a political football the president is throwing at Mitt Romney to try and whack him squarely in the jaw. (Trump responded to the Obama campaign e-mail by saying that he should get a “tax rebate” for the campaign fundraising off him.)

And the swarm of pundits climbing all over themselves to condemn Trump and call him a loon is incredibly unnecessary. We get it! Trump is spouting nonsense, and he’s an idiot, and Romney should totally kick his ass to the curb, you guys! But I think the Romney campaign knows what Trump is doing. Even if they secretly hate him right now and they would rather he shut up, they know it’s a stunt. Trump gets attention and exudes charisma. The Romney campaign, as Mediaite’s Frances Martel argued in a column this week, needs both of those. So there are more net negatives to disowning Trump for them than net positives.

If Donald Trump was actually someone who believed that the president wasn’t born here or is a “Kenyan usurper,” that would be a horse of a different color, Dorothy. But he doesn’t. If Trump is guilty of anything, it’s not being a racist or a “bloviating ignoramus.” It’s a lack of responsibility. He is taking something that is patently untrue and passing it off as the complete and honest truth.

Many people may believe that Donald Trump is sincere in his birther nonsense. But for me, it’s just easier to believe that someone is deliberately and knowingly distorting the facts than to believe someone with that kind of power and intelligence can willfully be that stupid.