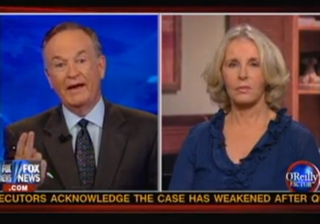 Of all the headlines of the bombing and shooting incident last weekend in Norway, Bill O’Reilly has taken most objection to the description of insane butcher Anders Breivik as “Christian.” After a monologue last night on the matter, O’Reilly challenged the author of one of those headlines, the Washington Post‘s Sally Quinn, to defend the label.

Quinn opened the floor by nothing that Breivik himself had used the words “I am a Christian,” but that was not anywhere near enough for O’Reilly. “There is no evidence at all that ties this guy to Christianity,” O’Reilly argued, “no evidence this guy is in any church.” Quinn countered that there were texts he had written with the label in them, noting particularly his claim that “we believe in Christianity as a cultural social idenity and moral platform.”

“What?! That’s insane!” replied O’Reilly, responding to Breivik’s words. “Mussolini called himself a Christian,” he argued, but in neither example is there any Christian activity– certainly killing is not approved of in Christian teachings. To Quinn, this didn’t quite matter because he self-applied the label: “if someone says they’re a Christian, you have to take them at their word.” She also argued that the same conversation had come up after the attacks at Ford Hood, where Nidal Hassan fired at his colleagues and killed a number of them. O’Reilly didn’t see the analog, as “he carried a business card that said ‘Soldier of Allah,’ and he committed his crimes in the name of Allah.” The Christian God, on the other hand, did not seem to play into the reasoning behind Breivik’s attacks. Nonetheless, Quinn countered that “most Muslims would tell you that guy is not a Muslim,” leaving writers with the same identity dilemma. She also concluded– being given the last word, that Breivik did have a religious goal: “the guy wants to rid the Christian Europe of the Islamic faith.”

The heated debate via Fox News below: