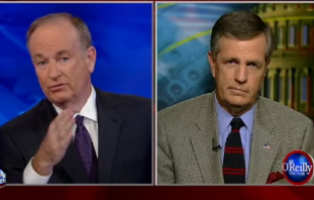 Fox News anchors: never too proud to praise former Fox News anchors. After Brit Hume raised the question of whether Obamacare would turn America into a socialist country, Bill O’Reilly went out of his way to praise him for keeping his personal beliefs out of his analysis of the news:

O’REILLY: Now you’re not an ideologue. You have strongly held beliefs, but I’ve never heard you analyze a situation from a conservative or liberal viewpoint. You don’t, you don’t do that. Do you object when that’s done?

HUME: Well, no, because, I mean, I think it’s a perfectly appropriate thing to do. I mean, people believe in their ideologies in America, I think, for practical reasons because they think that, for example, freewheeling capitalism…

O’REILLY: Is better for them.

HUME: …individual liberty is better for the country.

O’REILLY: Better for them, right.

HUME: Better for the country.

In his defense, Hume went out of his way to provide a fair and balanced argument in favor of liberal beliefs:

HUME: Strong national defense, the things that we associate with conservatism. Liberals believe, on the other hand, that that leaves the door open to too much injustice and too much inequality and too much danger of involving us in conflicts around the world that we shouldn’t be involved in, and that we’re better off going in another direction. Those are honest, ideological differences.

The liberal blogosphere has amassed a laundry list of purported biased statements by Brit Hume, like his description of Democratic Representative John Murtha as an “absolute fountain” of “naivete” for his stance on Iraq, his readiness to link the falling stock market with Obama, and his claim last June that he was “not so sure” that Obama is Christian. Sourcing-minded folks were particularly rankled by his statement that his team had relied on the conservative Media Research Center for “a daily buffet of material.”

Hume has his roots as an old-school print journalist, and he’s generally more circumspect than many at Fox, but his “never” taking conservative stances is a pretty obvious stretch.