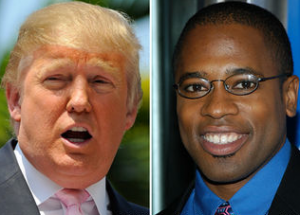 Former Apprentice Season Two contestant Kevin Allen laughed at Donald Trump‘s claim earlier today that he is the “least racist person there is.” Instead, Allen had this assessment to offer about Trump: “apparently he doesn’t like educated African-Americans very much.” And apparently the bitter Apprentice loser feels its appropriate to casually level a charge of racism at Trump because Trump didn’t choose him to win a reality television show.

Allen was interviewed by Talking Points Memo and spoke of Trump firing him from the show: “one of the knocks he had on me when he told me I was fired was that I was over-educated.” Allen has an undergraduate degree from Wharton, an MBA from Emory and at the time was pursuing a law degree at the University of Chicago (where one President Obama was a professor). Allen specifically refutes Trump’s statement about him not being racist, arguing:

“It’s an interesting statement, I doubt that its true. I think it’s important to note given his comment, that racism is not about just making racial slurs or about what you say outwardly, it’s also a mindset and how you feel about folks and how you compartmentalize. It’s interesting, I read his comment when he referred to how he has a great relationship with ‘the blacks,’ like it was some sort of alien population, which is a bit odd.”

It’s absurd to think the reason why Allen was fired was simply because he was an over-educated African American. Instead, longtime viewers of The Apprentice know that even though Trump could fire whoever he wants, there is no doubt that he is often coached by producers regarding which contestants should be kept for ratings purposes or which ones should be pitted against each other to make for a more entertaining finale. In other words, most recently Gary Busey was not fired by Trump for many weeks on Celebrity Apprentice and the sole reason was because the ongoing train wreck that is Busey made for compelling television.

Yet even if Allen makes the mistake of thinking reality television is reality, he was fired for a totally legitimate, non-racist reason. Why exactly should having multiple professional degrees and no real-world experience be that impressive when many people can make a highly successful career off of just one graduate degree? As a variation of the common saying, those who can do, do, and those who are afraid to try, continue to learn.

Regardless, what prompted this unnecessarily long analysis of The Apprentice firing process is how I continue to be perplexed why some people are absolutely convinced Trump is racist? Yes he speaks like an out-of-touch grandpa at times with his reference to “the blacks,” yet let me suggest why I think the subject of race rarely even crosses Trump’s mind. Besides the callous fact that it would be bad for business and Trump is first and foremost willing to do anything to protect and enhance his business persona, there is a simpler reason I theorize why Trump is not a racist: his massive ego would never allow it.

Trump thinks he is better than everyone else and it’s not because he’s white, it’s because he’s Trump. Now I’ve never met Trump, but I guarantee you he would never for a minute want to attribute his self-perceived superiority to his ethnicity. Instead I would predict Trump believes that it was his work ethic, entrepreneurial spirit and tenacity that made him better than everyone else, and it’s that same hard work that any individual, no matter the color of their skin, could similarly choose to perform that would earn Trump’s respect. Besides, Lil’ Jon is in the semi-finals for Celebrity Apprentice, so perhaps we should ask him of Trump’s great relationship with “the blacks.”