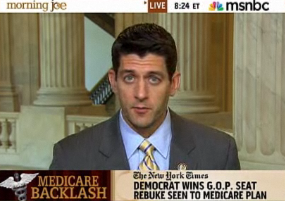 Republican Congressman Paul Ryan appeared on Morning Joe to start fighting against the deceptive claims being made about his plans to reform Medicare. After a lengthy explanation, Joe Scarborough advised Ryan of his problem: unfortunately detailed responses are no match for thirty second commercials that scare seniors.

Ryan said he saw the commercial where “Grandma” is being pushed off the cliff, and was legitimately funny joking that it took him many takes to get the push just right. Yet his criticism of how Democrats are handling Medicare was very serious:

“The Medicare story that’s being told here is the President and his party have decided to shamelessly distort and demagogue Medicare. So we’re going to see new ‘Mediscare’ reform campaign here.”

Ryan attempted to clear up many falsehoods, reiterating that nothing would change for anyone over the age of 55, arguing his reform is not a voucher program, and even claiming many ideas came from a bi-partisan panel under former President Bill Clinton. Ryan continued:

“The real irony . . . the President’s healthcare law takes $500 billion dollars from Medicare, not to make it more solvent, but to actually spend it on Obamacare and then it puts a new rationing board in charge of Medicare next year to start price controlling Medicare to deny access to current seniors.”

Ryan is confident that the truth will get out and that an attempt at fixing programs will triumph over the tactic of scaring people. Especially since he warns, “if we demagogue entitlement reform, then the programs themselves collapse.” And while it’s hard to argue against the idea that if nothing is done, then the programs go bankrupt, some may think such a statement in and of itself is a scare tactic.