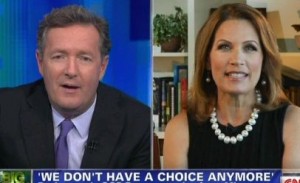 On his show Monday night, Piers Morgan challenged former GOP presidential hopeful Michele Bachmann on the issue of health care. Bachmann decried the government takeover of health care to a “bemused” Morgan, who pressed her with a comparison to car insurance. He asked her, what’s the difference?

Morgan asked plainly, “Do you have car insurance?” Following a positive response, Morgan followed up, “Who told you to?” Bachmann said she has an investment in her car and thusly has insurance in order to protect that investment. It’s different, she said, noting that not everyone has to buy a car. Morgan countered that to drive a car in this country, anyone has to buy insurance or face a penalty. It’s not different, he asserted, asking, “What’s the difference between Americans being forced by law to have insurance to drive a car and being forced by law to have insurance for their health?”

Asked to differentiate between the Affordable Care Act and Mitt Romney‘s health care initiative in Massachusetts, Bachmann said Romney clearly said his state solution is not one that should be applied at the federal level. Morgan disagreed, playing an old clip of Romney on Meet the Press, which he said proved otherwise. Unsurprisingly, the two couldn’t agree on the matter — or anything else related to the health care issue.

After the interview, Morgan spent the following segment hoping to fact-check some of Bachmann’s assertions.

The exchange with Bachmann below, via CNN: