President Obama Condemns Both ‘Disgusting’ Anti-Islam Video And ‘Mindless’ Violence Before The U.N. 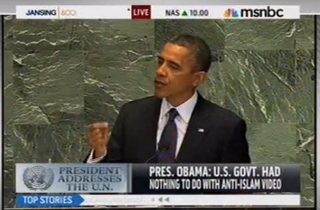 During his speech before the United Nations on Tuesday morning, President Barack Obama eulogized the murdered U.S. Ambassador Christopher Stevens, reiterated American values of freedom and tolerance, and condemned both the “crude” Innocence of Muslims video and the “mindless” violent protests that have swept across the region in the last few weeks.

“In every culture, those who love freedom for themselves must ask themselves how much they’re willing to tolerate freedom for others,” said the president. “And that is what we saw play out in the last two weeks as a crude and disgusting video sparked outrage throughout the Muslim world. I have made it clear that the United States government had nothing to do with this video. And I believe its message must be rejected by all who respect our common humanity. It is an insult not only to Muslims, but to America as well.”

The president then added that America welcomes all races and faiths, including Muslims, and so he understands why many might have been offended by such a video. However, he added, “I know there are some who ask why don’t we just ban such a video? And the answer is enshrined in our laws. Our constitution protects the right to practice free speech. Here in the United States, countless publications provoke offense. Like me, the majority of Americans are Christian and yet we do not ban blasphemy.”

“As Commander-in-Chief of our military, I accept people will call me awful things every day. And i will always defend their right to do so,” he said to applause. “The strongest weapon against hateful speech is not repression, it is more speech. Voices of tolerance that rally against bigotry and blasphemy.”

The president then went on to condemn the actual violence that took place across the region: “On this we must agree, there is no speech that justifies mindless violence. There are no words that excuse the killing of innocents. There is no video that justifies an attack on embassy. There is no slander that provides an excuse for people to burn a restaurant in Lebanon or cause death and destruction in Pakistan.”

He also scorned the “politics of hate,” saying that playing up inter-ethnic conflicts “offers only false hope” to the youth. “Burning an American flag does nothing to provide a child an education,” he added, “smashing apart a restaurant does not fill an empty stomach, attacking an embassy won’t create the a single job.”

“That brand of politics only makes it harder to achieve what we can do together,” he concluded.