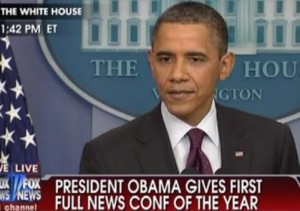 At Tuesday afternoon’s press conference, President Obama crystallized the terms of the widespread outrage over Rush Limbaugh’s attacks on Georgetown law student and activist Sandra Fluke, denouncing the remarks, and telling reporters that when he called Ms. Fluke, it was with his own daughters in mind. The President said he wanted his daughters to be able to speak their minds “in a civil and thoughtful way. And I do not want them attacked or called horrible names.”

The major miscalculation that Rush Limbaugh made, and which GOP candidates like Mitt Romney have compounded, is that average Americans don’t see Sandra Fluke as an opponent, but rather, their own daughters, sisters, wives, and even themselves.

President Obama was asked  “do you believe Rush Limbaugh’s apology was sufficient and heartfelt, and do you agree with the number of sponsors that have stopped supporting his show, and has there been a double standard? Liberal commentators have made distasteful statements and there’s not been such an outrage.”

He continued, “But I can comment on the fact that all good folks can agree that the remarks that were made don’t have any place in the public discourse. And you know, the reason I called Ms. Fluke is because I thought about my daughters, and one of the things I want them to do as they get older is to engage in issues they care about, even ones I may not agree with them on. I want them to be able to speak their mind in a civil and thoughtful way.”

“And I do not want them attacked or called horrible names because they are being good citizens, and I wanted Sandra to know that I thought her parents should be proud of her, and that we want to send a message to all of our young people that being part of a democracy involves argument and disagreements and debate, and we want you to be engaged, and there’s a way to do it that doesn’t involve you being demeaned and insulted, particularly when you are a private citizen.”

Here’s the clip, via Fox News: