President Obama: TSA Pat-Downs “An Inconvenience For All Of Us,” Except Me 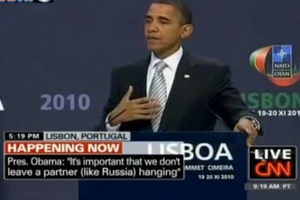 With all the “junk-touching” and pat-downs required by new TSA rules that arrived just in time for the holidays, it was inevitable that at the first possible opportunity some intrepid reporter would bring the subject up to President Obama. Taking questions at a NATO summit in Lisbon, Portugal, the President attempted to explain the logic behind the pat-downs, but prefaced his reasoning with a disclaimer that he has never and will likely never experience such a thing.

Responding to a request for his opinion on the matter from NBC’s Chuck Todd, President Obama opened with a confession: “I don’t go through security checks to get on planes these days, so I haven’t personally experienced some of the procedures put in place by TSA.” He then proceeded to defend this measure which he will never experience– one which everyone from Geraldo Rivera to Anderson Cooper seem taken aback by:

“I will also say that in the aftermath of the Christmas Day bombing, our TSA personnel are properly under enormous pressure to make sure that you don’t have somebody slipping on a plane with some sort of explosive device on their persons. And since the explosive device that was on Mr. Abdulmutallab was not detected by ordinary metal detectors, it has meant that the TSA has tried to adapt to make sure that passengers on planes on safe. Now, that’s a tough situation. One of the most frustrating aspects of this fight against terrorism is that it has created a whole security apparatus around us that causes huge inconvenience for all of us.”

Whenever there arises a conflict of interest between freedom and safety, it corners leaders to grasp at answers that, while possibly correct, seem to many inadequate. This was not an easy question for President Obama to answer. That said, prefacing his commentary with the fact that he is immune from the problem only to later note that the problem causes inconveniences for “all of us” is the kind of “let them eat cake” moment conservative commentators await with bated breath every time the president takes to the podium.

His full answer to the question via CNN’s coverage of his NATO summit speech below: