Rachel Maddow Defends Olbermann: ‘We Are Not A Political Operation. Fox Is’ 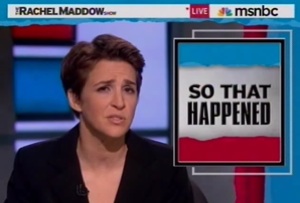 In the event you live under a rock, allow me to reset the story: Keith Olbermann owned up to donating to three Democratic candidates and was summarily suspended, indefinitely, without pay. Much as been written already, but tonight, Olbermann’s cohort (and mentee?) Rachel Maddow provided a vociferous defense of her colleague, drawing a false equivalency between Olbermann and Fox News’ Sean Hannity.

The central theme of Maddow’s defense is that others do the same – particularly Sean Hannity at Fox News. Missing from this defense is this: neither Hannity nor Fox News would ever deign to call Hannity a ‘journalist” whereas Mr. Olbermann has co-opted a Murrow-esque persona in support of the sacred ground that is “Capital J” journalism. Further, Fox News would probably tell you that Sean Hannity did not host their election coverage (as Keith Olbermann did Tuesday night amidst mixed reviews.)

There is plenty of room to debate the slippery line between opinion media and “journalism” that Fox News seems to take great advantage of, but Ms. Maddow’s defense of Olbermann seems to play right into FNC’s central defense, regardless if one thinks it has merit or not.

Watch Maddow’s impassioned defense of her mentor below and see if it feels more like a “Hail Mary” or a eulogy. Transcript follow the video.

You may have heard today that my friend and colleague Keith Olbermann was temporarily suspended from his job hosting Countdown on this network, because he made three personal political donations to candidates in this last election cycle. The reason that resulted in Keith’s suspension is that, here at MSNBC, there is an explicit employee rule against hosts making contributions like that. You can do it if you ask in advance, and if management tells you ‘okay.’ That’s what I understand happened with our morning show host’s political donations in 2006 under previous management. But if you don’t ask in advance for an exemption from the rule, you are more bound by the rule. For the record, the rule applies to us hosts here at MSNBC and NBC News staff. CNBC is not under NBC News, so CNBC staffers are not bound by the same thing.

I understand this rule. I understand what it means to break this rule. I believe that everyone should face the same treatment under this rule. I also personally believe that the point has been made and that we should have Keith back hosting Countdown. Here’s the larger point though. That’s going mysteriously missing, from all the right-wing cackling and the beltway, old-media cluck cluck clucking about this. This is what I think is missing.

Let this incident lay to rest forever the facile, never true, bullpucky, lazy conflation of Fox News and what the rest of us do for a living. I know everyone likes to say ‘Oh, that’s cable news, that’s all the same, Fox and MSNBC, mirror images of each other. Let this lay that to rest forever. Hosts on Fox raise money on the air for Republican candidates. They endorse them explicitly, they use their Fox News profile to headline fundraisers; heck, there are multiple people being paid by Fox News to essentially run for office as Republican candidates, If you count not just their hosts but their contributors, you are looking at a significant portion of the whole line up of Republican presidential contenders for 2012, they can do that because there is no rule against that as Fox, they run as a political operation, we’re not.

Yes, Keith”s a liberal and so am I, and there are other people on this network and their political views are shared with you, our beloved viewers. But we are not a political operation, Fox is. We are a news operation. And the rules around here are how you know that. Before it was politically safe to do it, Keith Olbermann attracted the ire of the right wing and a lot of others besides when he brought to light and raged against what he saw as the errors and sins of the previous presidential administration. Keith was also the one who brought to light Fox News’ water carrying role for the Bush administration, he was one who point-of-view journalism posed and put exclamation points on the problems in the political operation disguised as a news network model embraced by the guys across the street at Fox.

Now weirdly, it is Keith who is illustrating the difference between what he does on TV, what we do here at MSNBC and what goes on across the street. Good night.