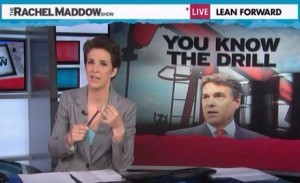 As MSNBC’s Rachel Maddow sees it, Governor Rick Perry has a bit of a “campaign problem:” The man is bad at debates. Currently, a NYT/CBS News survey has him polling at 6 percent among the GOP candidates.

But, she says, he has a comeback plan:

RELATED: Laura Ingraham To O’Reilly: ‘No One More Surprised By Cain’s Success Than Cain Himself’

1. Obtain new staffers from among the GOP establishment.

3. Play to the birthers.

4. Go on the offense against the whole idea of debating. (As you might remember, he recently told Fox News’ Bill O’Reilly that these debates are designed to “tear down” candidates.)

5. Using what he does have in his favor — financial support — to pump out more ads. This works in Perry’s favor because political ads allow a candidate to have more control over his image and talking points than he would in, say, a televised debate.

6. Talk up job creation. Maddow noted that Perry’s pledge to create 2.5 million jobs in the U.S. is actually underwhelming given that, over the last year and a half under Barack Obama, the economy has actually added 2.1 million jobs, and is expected to reach 2.5 million by year’s end.
6.a. Talk up drilling. (And pledge to dismantle the EPA.) Maddow, for one, sees Perry’s jobs plan as an “oil executive’s letter to Santa.” She referenced a New York Times article stating that many of Perry’s proposals appear to be “very similar to — if not drawn from — an industry-financed study that was endorsed last month by the American Petroleum Institute.”